Kremlin responds to opposing troops building up on Tajikistan-Afghanistan border 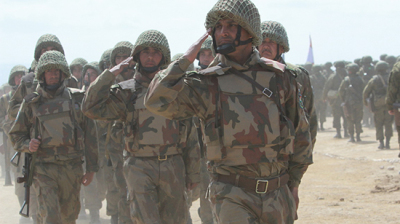 Substantial numbers of Tajik soldiers have been reportedly deployed to the border with Afghanistan.
By bne IntelIiNews October 1, 2021

Responding to reports of troops being deployed by Tajikistan and the Taliban by the Afghan-Tajik border, Russia has urged Tajikistan and Afghanistan's Taliban regime to resolve any issues in a mutually acceptable way.

Tajik President Emomali Rahmon has so far shown no sign of moving to recognise the Taliban-appointed cabinet in Kabul, while the Taliban has warned Dushanbe against meddling in Afghanistan's domestic affairs. Ethnic Tajiks make up over a quarter of Afghanistan's population, whereas the Taliban are mainly made up of Pashtuns, who are the largest ethnic group in the country. Rahmon has called for an ethnically all-inclusive government in Afghanistan instead of a Pashtun-led one.

Moreover, former officials of the Islamic Republic of Afghanistan have declared the formation of a government-in-exile based in Tajikistan’s capital Dushanbe, headed by former vice president of Afghanistan Amrullah Saleh.

The Taliban leadership has described the anti-Taliban resistance group’s attempt at forming a government in exile as “useless”. Saleh and another resistance leader, Ahmad Massoud, fled Afghanistan after the Taliban took over the Panshjir Valley, where many ethnic Tajik citizens of Afghanistan reside.

"We observe with concern the growing tensions in Tajik-Afghan relations amid mutually strong statements by the leadership of the two countries," TASS quoted Russian foreign ministry spokesman Alexei Zaitsev as saying.

The Taliban’s own information confirmed that thousands of Afghan special forces fighters were being deployed in Afghanistan’s Takhar province adjacent to Tajikistan, Zaitsev said. On the other hand, Russian RIA news agency cited Taliban spokesman Bilal Karimi as saying the movement has not been building up its forces at the Tajik border.

Tajikistan hosts Russia’s largest military base abroad. The base, it has emerged, may conceivably become a launching point for US counterterrorism operations in the near future.

The US is reportedly in talks with countries bordering Afghanistan on hosting “over the horizon” counter-terrorism operations in order to allow the US military to more easily surveil and strike targets in the Taliban-controlled nation, senators who attended a classified hearing with Pentagon leaders this week said. The sites could include bases run by Russia in the Central Asian nations, the senators said.

After testifying publicly before the Senate Armed Services Committee, a trio of the military’s top officials briefed lawmakers behind closed doors on the discussions taking place with the governments of Tajikistan, Uzbekistan and Kyrgyzstan.

The disclosure came just hours after Defense Secretary Lloyd Austin confirmed that the US asked Russia for a “clarification” on an offer from President Vladimir Putin to host the US counterterrorism operations at Russian military bases in the region.