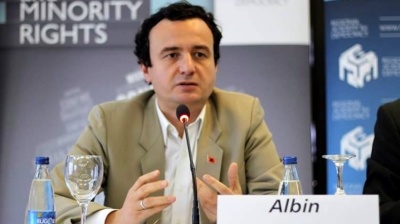 By Valentina Dimitrievska in Skopje August 9, 2022

Kosovo’s Prime Minister Albin Kurti said that a risk of a new conflict between Kosovo and Serbia is high, Italian daily La Repubblica reported on August 7.

Tensions between Belgrade and Pristina are on the rise following Kosovo’s decision not to recognise Serbian ID documents and licence plates. Kosovo and Serbia have a history of tense relations following Kosovo’s independence war, which ended with Nato strikes on Serbia in 1999 and Pristina’s secession from Serbia in 2008. Russia is one of the biggest supporters of Serbia, and there are fears Moscow could inflame the situation in the Western Balkans.

"I would be irresponsible if I said otherwise, especially after the world has seen what Russia has done with Ukraine,” Kurti said in an interview with La Repubblica.

Kurti said that before the invasion of Ukraine the chances of a new war were low, but now the situation has changed.

“The first episode, a consequence of the fascist idea of ​​panslavism that the Kremlin has, was Ukraine. If we have a second episode, for example in Transnistria, then the probabilities that a third war will develop in the Western Balkans, and in Kosovo in particular, they will be very high,” Kurti said.

Regarding the recent tensions in northern Kosovo, Kurti claimed that the road blockades by ethnic Serbs were organised by Serbia and supported by Russia.

The barricades on two border crossings with Serbia were erected on July 31 after Kosovo’s authorities were set to implement the decision not to recognise Serbian ID documents and licence plates on August 1. The tensions calmed down after Kurti said he would postpone the implementation of the new rules until September.

"In the third week of August there will be a meeting in Brussels between us and the Serbs on general aspects of Kosovo-Serbia relations, I hope it will help to reduce the tension," Kurti said.

He was referring to a planned meeting with Serbian President Aleksandar Vucic in Brussels on August 18 as part of the EU-mediated dialogue.