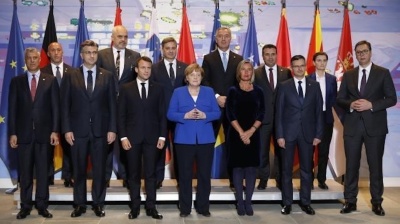 The latest attempt by Germany and France to restart the dialogue between Serbia and Kosovo at a Western Balkans meeting in Berlin produced no result as the leaders of the two countries declined to make any compromise from their previous positions.

Serbia and Kosovo have been engaged in EU-mediated talks to normalise their relations since 2013, after Kosovo unilaterally declared independence from Serbia in 2008. Kosovo is still not recognised by Belgrade as a separate country.

There has been progress, to a large extent incentivised by both countries’ wish to eventually join the EU, that resulted in the signing of the landmark Brussels Agreement in 2013. However, progress in the EU-mediated talks since then has been patchy.

The talks stopped altogether after Kosovo introduced 100% tariffs on goods from Serbia and Bosnia & Herzegovina in November 2018, after Belgrade thwarted Pristina’s bid to join Interpol. Tensions have escalated since then, and the deadlock deepened in March after the Kosovan parliament endorsed a controversial platform on the future dialogue with Belgrade, which the Serbian government says disrespects rights of minority Serbs there.

In Berlin, Serbia’s President Aleksandar Vucic said no progress could be made unless Kosovo lifts the tariffs, b92 reported.

Meanwhile, Kosovo’s President Hashim Thaci expressed his frustration with the stalled normalisation process, saying the EU was “too weak” to move the process forward.

"No talks or agreement are possible without the participation of the United States of America," he told journalists after the meeting, AP reported.

"The European Union's is too weak and disunited to move things forward in the Western Balkans.”

He echoed the message in tweets issued after the meeting, commenting on the “family photo” of EU and Western Balkan leaders: “We all need to work together to give this joint photo more dynamism, so we can speed up the Euro-Atlantic integration of Western Balkans.”

“Next summit is in July in Paris, invited by President @EmmanuelMacron. One hopes after EU Parliamentary elections, the constructive, unified voice in EU will ensure Kosovo obtains #visalib and comprehensive agreement can be reached with #Serbia, opening our path to UN, NATO & EU,” he added.

The meeting, which brought together high officials from all Western Balkan countries, was initiated by German chancellor Angela Merkel and the French president Emmanuel Macron. Although it was organised as a regional event, the two organisers made it clear that Serbia-Kosovo relations will be the main topic. Macron tweeted during the meeting: “In Berlin with German Chancellor Angela Merkel. We are bringing the Western Balkan countries together with two priorities: 1. Restoring dialogue between Serbia and Kosovo. 2. Work towards the stability of the region.”

Meanwhile, a report released by the European Stability Initiative (ESI) think tank called on the EU to dismiss any talks of border changes as part of a deal to normalise relations between Serbia and Kosovo. It also said in the report that the EU should put pressure on Belgrade to stop its “war-mongering” rhetoric.

The idea of ‘border corrections’ was proposed by Vucic in 2018 and was positively accepted by Thaci, who suggested that southern Serbian municipalities with a large ethnic Albanian population should become part of Kosovo. Such a deal would most probably see the exchange of the majority Serb municipalities of northern Kosovo exchanged for the majority Albanian Presevo valley in Serbia.

According to ESI, such a deal would open a Pandora box of further talks on redrawing Balkan borders and could lead to new conflicts in the highly unstable region.

Merkel has previously spoken of the dangers of a land swap, but US officials have indicated this might be acceptable, with national security adviser John Bolton saying last year that Washington would not stand in the way of a deal reached by Belgrade and Pristina.

Western Balkans’ regional GDP to slump by as much as 5.6% this year

Illegal border crossings to EU via Western Balkans increase 60% in January-April
Kosovo political crisis deepens as highest court suspends decree on new PM designate
Western Balkans’ regional GDP to slump by as much as 5.6% this year