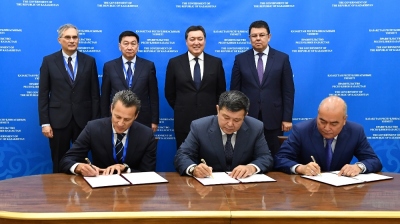 Minutes of direct negotiations on the Abai project signed by officials from KazMunayGaz and Italy’s ENI.
By bne IntelliNews July 8, 2019

Kazakh state-run oil producer KazMunayGaz (KMG) and Italy’s ENI signed on July 4 a “protocol of direct negotiations” on granting subsoil use rights for exploration and production of hydrocarbons within joint operations on Abay, an offshore area in the Kazakh segment of the Caspian Sea, the Kazakh prime minister’s website reported. On the same day, Kazakh Energy Minister Kanat Bozumbayev along with France’s Total, Oman Oil and Partex Oil signed an agreement covering their cooperation on exploiting the Dunga oil field in Kazakhstan.

The first agreement sees KMG and Eni each holding a 50% stake in the Abay block, located in the northern part of the Kazakh sector of the Caspian Sea, around 50 km away from the coast. The block will be operated by the equally Eni and KMG-owned “Isatay Operating Company”, which also operates the Isatay block in Kazakhstan. The agreement envisages drilling the first exploration well 2,500 metres deep, carrying out 2D seismic exploration covering 700 km and other exploration works worth over KZT14bn (€32.45mn), the report said. Eni will cover KMG’s share of the costs during the exploration period.

The Dunga field deal extends the term of the production sharing agreement for the field for 15 years from 2024 to 2039, allowing for it to produce 9mn more tonnes of oil. The parties also agreed to carry out the third phase of the Dunga field’s development worth $300mn, set to increase the maximum level of oil output to 850,000 tonnes per annum from the current level of 600,000 tonnes.

The project will add wells to the existing the Dunga field’s infrastructure and upgrade the associated processing plant to increase its capacity by 10% to 20,000 barrels per day by 2022.

The document also raises Kazakhstan’s share “in the section of profitable products under the Agreement on a progressive scale from the current 40% to 60% by Jan. 1, 2025”, the report said. The agreement requires the companies to supply part of the extracted oil to Kazakhstan’s domestic market and fund social infrastructure projects for at least $1mn per year.

Thanks to the gradual economic recovery in 2017-2018, foreign investor interest in Kazakhstan has been on the rise. Though both aforementioned agreements were concentrated in the hydrocarbons sector, Kazakh authorities have been placing efforts into attracting investment into economic diversification. Much of this diversification prioritises food production and agriculture.

In May, largest US beef producer Tyson discussed an investment of approximately $200mn in a Kazakh plant that would form part of a potential total investment of several billion dollars later on, Financial Times reported. Tyson later said in a statement that no agreement has been formalised yet.

UN Food and Agriculture Organisation (FAO) signed a letter of intent on June 20 to work on developing “organic” agriculture in Kazakhstan last month.

Other areas of investment include logistics and infrastructure projects, mostly funded by China. These include recent plans by Shanghai Ace to develop its own transportation and logistics infrastructure in the “Seaport Aktau” Special Economic Zone (SEZ).

"Westlessness" dominates the discussion at the Munich Security Conference

Kazakh industrial output up by 4.1% y/y in January

Ukraine appoints new top management of power generation major Centrenergo, Kolomoisky physically bars them from office
19 hours ago
Russia’s RTS crashes below 1,400 in the worst sell-off since 2008 as coronavirus pandemic fears grip emerging markets
22 hours ago
Poland’s stock market suffers heavy losses amidst fears of coronavirus spread
1 day ago
General election 2020: Slovakia on the eve of political changes
1 day ago
Azerbaijan ambassador pledges to increase investments in Ukraine 'up to $1.5bn-$2bn' in 2020
1 day ago