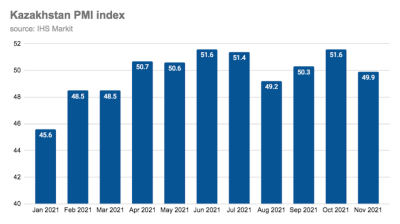 Operating conditions across the Kazakh manufacturing sector were “broadly stable” though registered a slight contraction in November, according to the latest Tengri Partners Kazakhstan Manufacturing Purchasing Managers’ Index (PMI). The index posted 49.9 in November, down from the 51.6 recorded in October, ending a two-month sequence of growth, the PMI survey report released by IHS Markit showed on December 1.

Anything above 50.0 signifies an overall expansion and anything below 50.0 represents a deterioration. Output and new orders continued to rise, but at reduced rates. Meanwhile, inflationary pressures strengthened further and higher living costs led some staff members leaving manufacturing for other opportunities elsewhere, resulting in another reduction in employment.

Anuar Ushbayev, managing partner and chief investment officer at Tengri Partners, said: "Latest PMI data suggest that manufacturers in Kazakhstan have started to feel the strain from the various headwinds facing the sector, with material shortages, a lack of labour and price pressures all acting as negative influences at present. As such, business confidence dropped to a one-year low in November.”

"Firms were still able to eke out growth of output and new orders, but will be hoping for an improvement in wider economic conditions if they are to sustain these improvements through to the end of the year," he added.

“Supply-chain issues were highlighted by a further lengthening of vendor lead times. In fact, the latest deterioration was the most marked since January. Longer delivery times reflected logistical issues, a lack of vehicles to transport goods and delays from China and Russia,” the PMI survey report said. “Material shortages and logistical issues caused a rise in backlogs of work, the sixth in the past seven months.”

“Manufacturers were also faced with a sharp increase in costs for inputs, with the rate of inflation the third-fastest in almost three years of data collection so far. More than two-thirds of respondents signalled an increase in their input prices over the course of the month,” it added.

Kazakh officials decline to confirm or deny death of Nursultan Nazarbayev
Perspectives | Why Uzbekistan does not fear a ‘Kazakh Winter’
INTERVIEW: Kazakhstan in crisis

Annual inflation reached 8.2% y/y in December and energy prices contributed more than half.

Slovak inflation up to 5.8% in December

Consumer prices increased by 7.4% y/y in December, while core inflation rose to 6.4%.

Mass emigration and the ongoing coronavirus pandemic contributed to the decline.

The average net wage in Romania rose by 2.8% m/m in November to €736.5 in one of the highest monthly increases over the past couple of years.