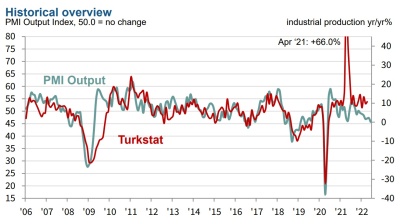 The Turkish manufacturing sector has sunk into a “challenging demand environment”, according to the Istanbul Chamber of Industry Türkiye Manufacturing Purchasing Managers’ Index (PMI) for June.

The headline PMI fell further into contraction territory, registering 48.1 compared to 49.2 in May (anything below 50.0 indicates a contraction).

The PMI reading signalled a moderation in the health of Turkish manufacturing that was the most marked since the initial wave of the COVID-19 pandemic in early 2020.

“Increases in employment were again the main positive, although even here the rate of job creation was among the softest in the past two years. The months ahead seem likely to continue to prove challenging for firms.”

S&P Global said: “Business conditions have now softened in four successive months. Price rises and challenging economic conditions contributed to a weaker demand environment at the end of the second quarter, with both output and new orders moderating as a result.

“In both cases, the slowdowns were more pronounced than seen in May.”

Steep inflationary pressures were recorded in June, with both input costs and output prices rising more quickly than the respective series averages.

“Raw material shortages contributed to a further lengthening of suppliers' delivery times. Although more pronounced than seen in May, the extent of supply-chain disruption was again much weaker than during the worst of the recent delays.”

Moody’s downgrades Turkey to six notches below investment grade
Home of the humbled lira, Turkey’s the biggest cryptocurrency market in the Middle East
Envoy says start made on construction of Turkish attack drone factory in Ukraine

Since the beginning of the year, BET-TR has grown by 5.71% ytd, recovering entirely from the fall caused by the war in Ukraine and deterioration in Romania's economic prospects.