It’s four more years of Law and Justice in Poland but what’s next? 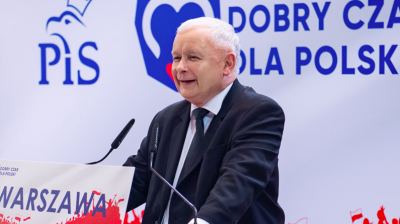 The question everybody is asking themselves ahead of Sunday’s general election in Poland is not who will win it but how big the ruling populists’ margin of victory will be.

Polls give the incumbent Law and Justice (PiS) a near-certain majority in the lower house of the Polish parliament, the Sejm. The outlook for the Senate is a bit cloudier but still to PiS’ advantage. So what is next for Poland?

Should PiS win a majority in both houses again, a likely outcome is a further tightening of its political grip over Poland and more conflict with Brussels. At least that is what one can infer from the rhetoric that came to the fore in the last weeks of the campaign – although it has been clearly present since PiS won the previous election in 2015.

“We will go down a very different road to that which used to be the road of pseudo elites that once managed to gain control over Poland,” said PiS’ chairman Jaroslaw Kaczynski at a campaign rally in Sosnowiec earlier this week.

“The new Polish power elite and I hope that the greater part of the cultural elite and other elites, no longer work for our enemies,” he added.

On course, on track
Barring a totally unexpected turn of events in the run up to the vote or if the polls are completely amiss – both rather unlikely developments – PiS is about to get four more years to carry out its revolution in Poland. A revolution that the ruling party likes to describe as pandering to those who feel they have been marginalised by the transition from the communist era.

And that is not just by the generous social transfers the party promised and delivered – although the “they keep their promises” factor is strong with PiS’ consistently strong showing in the polls. It also is by offering a sizeable part of Polish society pride in their country, which PiS says has been hitherto disparaged by the liberal and leftie elites that want nothing less than the destruction of the traditional values of Polish society.

“We want to build a Polish version of the welfare state,” Kaczynski said in Sosnowiec.

Voters appear to want that as well. PiS has consistently polled at 40% of the vote at least in a number of polls carried out several weeks before the election. Politico Europe’s poll of polls gives Kaczynski’s party 47% on average. Just how big a majority the incumbent party is going to get will depend on turnout and how well the opposition will do.

In theory, the higher the turnout, the better for the opposition because of PiS’ apparently smaller potential to rally voters outside those already devoted to the ruling party.

The biggest opposition party, the centre-right Civic Coalition (KO) – a conglomerate of parties led by Civic Platform (PO) – is miles behind PiS at 27% in the poll of polls. The resurgent Lewica (Left), made of the Democratic Left Alliance, Wiosna (Spring), and Razem (Together), is next at 14%.

KO and Left are then certain to pass the 5% threshold parties need in Poland to win seats in the lower house of the parliament (the elections to the Senate use the first past the post system).

What might turn pivotal for the election results and PiS’ getting a majority or not is whether the two smaller parties, the agrarians from PSL and the far-right Konfederacja, manage to beat the 5% threshold. PSL is at 7% in the poll of polls with Konfederacja at 4%. But even those two passing the threshold will not be enough if the support for PiS surges to around 45%.

If the opposition garners enough combined votes to outweigh PiS, it is not out of the question they could form a coalition. Again, that is an unlikely scenario, hinging on a combination of the right turnout, PSL pulling off a surprise result, and who the estimated 10% of undecided voters will ultimately vote for.

The opposition’s problem is also that - apart from the resurgent left - it has hardly run a convincing campaign. One of the reasons is that in contrast to PiS’ machine able to produce entire laws in literally hours and distribute favours at will, the opposition can offer mostly criticism and rhetoric. Specifically KO’s campaign has lacked consistency, vigour, and a coherent vision of Poland after PiS.

On top of that, PiS has turned the public media – television especially – into a remorseless propaganda tube. The state-run TVP’s flagship news programme Wiadomości had a 20.4% share in the market in September. That is only marginally behind the commercial – and critical of the government – Fakty by US-owned broadcaster TVN with 22.7%.

Cracking down on VAT evasion (a process started by the previous government led by PO) and benefitting from ever more taxes flowing into the state coffers in a buoyed economy of over $2 trillion, PiS has been able to run increasingly smaller deficits while continuing to roll out social expenditure. That is unlikely to change in the next four years.

“The economic policy of the government is likely to remain growth supportive, especially in the consumption area,” Raiffeisen Bank wrote in an analysis of the possible election outcomes.

Consumption is expected to remain the main driver of economic growth next year, supported by record-low unemployment, rising wages, and the exceptionally high consumer sentiment. Some observers say support for PiS won’t wane as long as the economy keeps going the way it has been for the past four years. A slowdown is on the cards indeed but most likely it will be the government’s worry before the next election in 2023, not now.

A big lie?
What some hail as a unique blend of a traditionalist – if not downright xenophobic and excluding large parts of the society such as LGBT people – approach to policymaking with a left-leaning economic programme of government money transfers may well have dire consequences for Poland in the coming years.

That at least is the view of Malgorzata Jacyno, a sociologist of culture, who told Gazeta Wyborcza that PiS’ generous social transfers and the promise to up the gross minimum wage by nearly 80% by the end of 2023 are substitutes for, rather than elements of, modern policy.

“[PiS wants] privatisation of social policy. It’s ‘citizens, buy everything yourselves.’ That's what [the child benefit programme] 500+ is for, that's what [increasing] minimum wage is for – for citizens to give up public services,” Jacyno claimed.

Without a properly functioning network of key public services – education, health care, and housing – Poland is set to remain a semi-peripheral state forever, she said.

PiS has overhauled Poland’s education system amidst enormous criticism for introducing chaos, lowering standards, and not offering the underpaid teachers decent pay rises. The ruling party has also attempted to introduce a large programme of public housing but that has fizzled. There also is an ongoing crisis in Polish health care, with hospital wards closing down nearly by the week because of too few doctors.

The ruling party has not given those issues much space in the campaign indeed – neither has the opposition, except – not unpredictably - for the Left. Ominously for Poland, how – if at all – the likely next PiS government will tackle those key problems in the next four years remains unclear.

Poland’s PMI rises but remains deep in coronavirus trough
Poland’s inflation continues coronavirus-driven descent in May, flash estimate shows
LONG READ: The Growers - a handful of countries in New Europe are coping with the coronacrisis and are still expanding

Investors hot for corona Eurobond issues from Southeast Europe
3 days ago
LONG READ: The Growers - a handful of countries in New Europe are coping with the coronacrisis and are still expanding
10 days ago
Foreign share of Ukraine's domestic bonds falling, demand for fresh debt spluttering
8 days ago
Russia’s VTB trapped in a London lockdown until 2024
8 days ago
Movie night at the airport
13 days ago