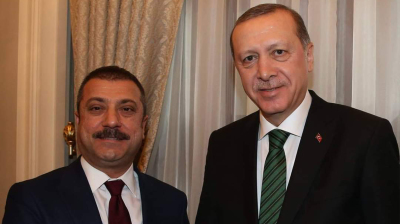 Turkey’s central bank on October 28 released its latest quarterly inflation report in line with its reliable communication timetable. With the serried ranks of analysts lined up on the platform, the national lender’s locomotive pulled into the station and disgorged governor Sahap Kavcioglu. The regulator, he said, was in its wisdom hiking its expectation for end-2021 official inflation to 18.4% from the previous figure of 14.1%, given in the July inflation assessment.

The upper limit on the official inflation forecast was also moved up, taking the expectation to 19.5% from 16%, closer to the market’s current anticipation of something above 20%.

Need we remind you, Turkey’s central bank is not famous for its forecasting ability. Though jokes about its forecasting adventures are by now rather stale. Yet the inflation report did not disappoint! For sensation, analysts found themselves fixated on a part promoting Turkey’s new inflation theory.

Previously, on October 11, Kavcioglu, governor since March, was in parliament to attend a meeting of the planning and budget commission. The commission is presently discussing the 2022 state budget for the sake of formality (Turkey’s parliament stands as a formality in general).

Following the meeting, Durmus Yilmaz, a lawmaker of the small Iyi opposition party and the last Turkish central bank governor who was actually a central banker, who served between April 2006 and April 2011 (2011 is a critical year in Turkey’s late history. It can be seen as the year when Turkey’s glorious collapse began with the Syria War, while it also brought other key junctures such as the introduction of the legendary interest rates corridor policy by Yilmaz’s successor, Erdem Basci), informed the public that Kavcioglu had been referring to a new inflation theory.

Is your brow furrowing? Don’t let it. There’s no need to spend much time on this. What we have here is simply a ‘troll’ argument designed to fool the mainstream media audience.

No serious observer of the country’s leader, President Recep Tayyip Erdogan, would by now be seeking any consistency from the man, but it is interesting to note that the real sector (which is supposed to close the current account gap by boosting exports) is complaining about the rate cuts, while the trade associations working to serve local demand (which boosts imports) are voicing their approval.

For August, meanwhile, the central bank released an official current account surplus—if you buy it.

On October 7, some encouraging news in Turkey’s struggle against double-digit inflation came out of Ankara’s Ayranci district. A shop, it was reported, had begun selling rotten fruit and vegetables at a 50% discount. If national statistical institute TUIK takes its prices from this outlet, Turkey may announce food deflation for October.

One in three in Turkey, where at least 90mn souls live, when migrants are included, means 30mn people. People are seen gathering food waste after the closing of a district market. Not an uncommon sight in the country.

Stinging price hikes have continued with gasoline, while coal prices have been jacked up by 25% following a 15% hike in September. In other market news, import taxes on sunflower seed, safflower, crude oil and sardines were zeroed.

For the next chapter in Turkey’s tragicomedy of monetary policy, the next stop is November 3 when official inflation for October will be released. The market assesses the figure must be something above 20%.

Turkey’s monetary policy has in fact entered uncharted territory since the “core inflation” story ended with the latest rate cut on October 21, when the policy rate was cut to 16%, below what the central bank contends is “core”. For September, official headline CPI inflation was released at 19.58% while “core” stood at 16.98%.

On November 18, the next rates decision will be announced. It is currently 50-50 on whether that will be a hold or a cut.

On October 25, alarm bells rang after the big state banks announced that they had cut their loan rates in the wake of the central bank loosening. The flow of loans will be the main focus now.

The latest all-time weakest rate of the Turkish lira (TRY) versus the USD stands at the 9.8595 registered on October 25. Since Erdogan changed his mind on his threatened expulsion of 10 western ambassadors during the afternoon of that day, his regime has been defending the 9.60-level.

On the global markets front, the USD index (DXY) is moving within the 93s. On November 3, the Fed’s open market committee will release the result of their rate-setting meeting. Some tapering talk is awaited.

The Fed will keep printing money until at least July 2022, just at a slower pace. Whether it will ever be able to permanently end its money printing business is questionable. The global markets will anyway remain unfavourable until the new year rally begins in December.

In foreign policy, Erdogan claimed that Joe Biden stalled on him again about meeting at the G20 in Rome this weekend and that they will instead meet in Glasgow at the “green” comedy conclave (by now confirmed by the White House). The summit will be held on November 1-2.

Where Turkey’s concerned, foreign policy has turned into a cat and mouse game, with Erdogan chasing after a meeting with Biden anywhere he thinks he might pin him down. Biden should take care if he ventures into the White House larder at night-time. Erdogan could well be lying in wait.

To Biden, Erdogan is a shabby dictator who should be met for transactions at the backdoor. To Erdogan, who must fear losing relevance on the international stage that is a distraction from the carnage of his own making at home, Biden is a vital photo opportunity.

Prior to meeting Erdogan, Biden will need a briefing on the former’s plans for another military adventure in Syria. For now, despite a troop build-up, those plans are on hold. A complication is that the Ukrainians have used a combat drone made by Erdogan’s younger son-in-law to strike Russian-backed separatists in the Donbass. That won’t be helpful when it comes to getting permission from the Kremlin to kill some Kurds in Syria.

ISTANBUL BLOG: Don’t bet for or against another rate hike in early 2022. Leave it to Erdogan