ISTANBUL BLOG: Don’t bet for or against another rate hike in early 2022. Leave it to Erdogan 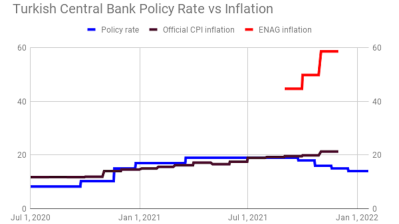 As the global markets know full well by now, Turkey’s President Recep Tayyip Erdogan has set his face against market orthodoxy so there was no surprise on December 16 when the central bank monetary policy committee (MPC) announced it had cut its policy rate by another 100bp to 14% despite official inflation of 21% and the ongoing collapse of the Turkish lira to nether regions never glimpsed before.

“The cumulative impact of the recent policy decisions will be monitored in the first quarter of 2022,” the MPC said in an accompanying press release. Well, now, the finance industry just cannot come to terms with the fact that there is a mercurial strongman at the helm who is conducting an unorthodox economic experiment conventional economists have described as outright lunacy, thus market players have assumed this note from the rate-setters means the MPC will now keep the policy rate on hold throughout the first quarter of 2022—but the wise observer can only conclude that where Turkey under Erdogan is concerned, predicting what will happen next in the country and its economy, even as regards the next 10 minutes, is downright impossible.

Take the biggest pinch of salt you can before absorbing commentaries on what is occurring in Turkey. Keep away from the rumours and the pundits and just rely on the confirmed facts you can lay out with confidence.

Observers should not be in need of any more punditry warning that nothing is a surprise in Turkey when Erdogan seems to think he can rein in the economic chaos he is unleashing through the sheer force of his cult of personality.

Getting back to facts, though, one interesting aspect of the build-up to the rates announcement was that the latest finance minister Nureddin Nebati’s brother hit bull’s eye with his prediction a day ago of where the central bank would take the policy rate.

This is even interesting by Turkey’s dubious standards. It’s a first. The brother, Seydullah Nebati, who is also a business partner of the finance minister, essentially released the rates decision a day before it was due.

Might he even have an insight on when the central bank will or will not make interventions on the FX market? It’s been quiet on that score since December 12, the last day during which the regulator was intervening on the interbank market.

The Turkish lira’s (TRY’s) all-time low versus the USD, as recorded on December 16 after the rates news, stands—at the time of writing—at 15.748.

Observe that horizontal barriers are still visible on the USD/TRY chart, even when the central bank has not officially intervened. The government-run banks’ net FX position is watched.

By December 13, net lira loan flows of this month amounted to TRY42bn.

Five-year credit default swaps (CDS) on Turkey have been hovering above the 500-level.

On the global markets front, the USD index (DXY) is around the 96-level.

On December 15, the Fed said that it would cut its monthly net money printing volume by $30bn to $60bn in January from $90bn in December. It plans to employ identical cuts in February and March. The net money printing is to reach zero in April. The previous schedule, released in November, suggested zero in July rather than April.

Note that around $1.7 trillion have already been printed. It presently resides on the Fed’s balance sheet under the Treasury General Account (TGA) and the Reverse Repo (RRP) account. When the Fed zeroes its net money printing volume, this money will continue flowing into the system.

On January 29, the Fed will release the results of its next meeting.

On January 22, Turkey’s central bank will release its next rates decision.

On Turkey’s foreign policy front, there’s not much visibly afoot. Domestically, the tension grows along with prices.

ISTANBUL BLOG: With official inflation a hair’s breadth from 70%, Turkey is on the tail of Zimbabwe