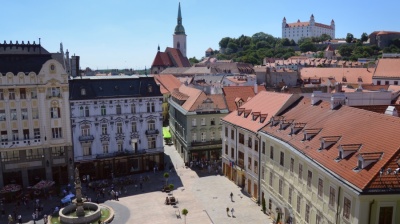 The latest CESEE Bank Lending Survey from the European Investment Bank (EIB) shows that international banking groups remain committed to the Central, Eastern and Southeast Europe region, with their strategies tilted “towards expansion or stability” despite the coronavirus (COVID-19) pandemic.

The survey, carried out in spring 2021, showed that around 60% of the banking groups intend to maintain operations in the region, while 30% intend to expand operations selectively. This is a more positive picture than in previous surveys.

More than 80% of banking groups surveyed expect their profitability in the region to be equal to or higher than their group’s total profitability over the next six months.

"Following the large negative COVID-19 shock, banking exposures in net balances to the region started to expand over the past six months,” says the report. The survey showed that the number of banks declaring a reduction in their exposures to the region was lower than those declaring an increase in exposures.

“Our latest survey shows that the policy responses to the COVID-19 shock have been instrumental in limiting the most abrupt and negative effects for the banking sector in Central, Eastern and Southeastern Europe in 2020 and early 2021,” said the EIB vice-president responsible for economic studies, Ricardo Mourinho Félix.

Only a few banking groups signalled a contraction, and this was only in terms of intra-group funding. Meanwhile, banking groups expect an increase in cross-border exposures.

However, there are different views across countries in the region, with banks singling out Bosnia and Herzegovina and Kosovo as having signs of somewhat increasing lower market potential, while in other countries they see medium to reasonable market potential.

However, the report added: “Prior to the COVID-19 pandemic, exposures had been oscillating, reflecting an increased level of global uncertainty and volatility. This calls for a cautious approach when interpreting the current outcomes.”

Demand for loans and credit lines rose in the six months before the survey was compiled, recovering from the sharp contraction recorded in the second and third quarter of 2020. This was the first contraction in aggregate demand in six years. 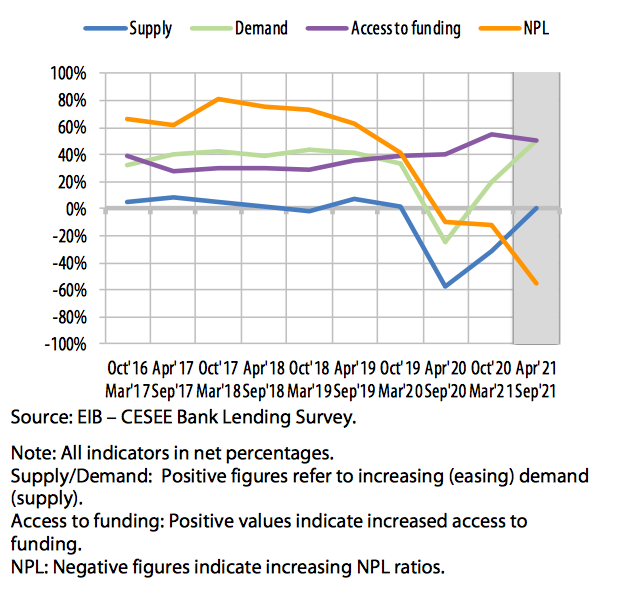 “The increase in demand was primarily supported by working capital needs, debt restructuring but also positive housing market prospects,” according to the report.

“Debt restructuring started to be a positive contributing element since March 2020, whilst its contribution was close to zero in pre-pandemic years. On the other hand, the contribution from investment continued to be negative, as already detected in spring and autumn 2020 waves of the survey. This is a significant turnaround, because fixed investments were among the highest positive contributors prior to the COVID-19 pandemic.”

On the supply side, the report said that credit standards tightened – the tightening was observed across the client spectrum, but in particular for small and medium-sized enterprise (SME) and corporate lending. Looking forward, banks anticipate that aggregate supply conditions will gradually move towards a neutral stance but not ease in the next six months.

“The financial system in Central, Eastern and Southeastern Europe is showing a remarkable resilience in [the] face of one of the largest economic shocks it has ever faced. International banks continue to show their commitment to the region,” said EIB chief economist Debora Revoltella.

However, Revoltella added, "Nonetheless, our survey shows weak investment demand and still tightening conditions on loans to smaller business and corporates. A continued joint effort by the public and private sector as well as multilateral partners is needed to boost investment activities, to help the region not only recover but to further prosper and meet the challenges of the green and digital transition.”

The survey showed uneven expectations across client portfolios. The household segment is anticipated to benefit from easing standards, while SMEs and large corporates are still expected to face tightening credit standards, the survey revealed.

However, the report added: “Despite a tightening in supply conditions, approval rates have increased in the past six months compared to the significant drop recorded from April to September 2020. The terms and conditions of loan supply tightened in terms of size of the loans and only slightly in terms of maturity.”

Meanwhile, collateral requirements have tightened, especially for SMEs. When it comes to the reasons for tightening conditions, the survey reveals local market outlooks and non-performing loans (NPLs) as limiting factors, along with some international factors, specifically the global market outlook and EU regulation. Meanwhile, changes in the domestic regulatory environment and local bank funding played an easing role.

“Access to funding has continued to ease in the CESEE region over the past six months backed by almost all sources of funding,” said the report. It added, however, “Easy access to retail and corporate deposits supports a positive outlook. In addition, CESEE subsidiaries report that easier access to short-term funding is making a positive contribution to overall funding activities. IFI funding contributed positively.”

On the other hand, it added: “Longer-term funding conditions have only marginally eased. Subsidiaries did not indicate a positive contribution from access to international and intra-group funding over the past six months."

NPL ratios had been falling in the years since economies in the region began to recover from the international economic crisis more than a decade ago. With the pandemic, however, NPL ratios deteriorated in the autumn 2020 wave, though as the report said, the impact was smaller than anticipated. The report’s authors forecast that the current negative trend will continue over the next six months.

“The COVID-19 crisis has brought about a significant change to the asset quality in portfolios. The fall in NPLs recorded until early 2020 came to an end,” said the report.

“Banks' expectation[s] both in spring 2020 and in autumn 2020 were more negative regarding NPL developments compared to what the very same banks actually recorded over the same period ex-post. This suggests that the policy and banks’ strategic responses may have played a mitigating role.” NPL ratios are expected to deteriorate further across the board over the next six months.

Of the bank subsidiaries surveyed, around 43% said their NPL ratios had risen, while 32% said they had continued to decrease over the past six months. 65% of banks expect an increase in NPL ratios over the next six months, while just 10% anticipate a decrease.

Banks reported a "significant positive role” from regulatory and policy measures to support lending. It cites banks that took advantage of public guarantee schemes as saying that these were “very effective” in supporting loan extensions. Meanwhile, a smaller number of banks took advantage of central bank long-term refinancing operations, which most said were supportive to credit conditions. Commenting on which measures were most effective in supporting lending to the economy, banks singled out flexibility on NPL treatment and capital relief measures such as the release of regulatory buffers.

As the study notes, many countries and banks in the region have adopted moratoria measures for loans. According to the report, this covers between 0% and 20% of the total outstanding loan portfolio for around 70% of the banks surveyed, and between 20% and up to 60-70% for the remainder.

Another impact of the pandemic has been to spur on digitalisation. According to the study, banks have continued to speed up their propensity to digitalise, in particular in client outreach and risk management.

Croatia’s spectacular performance in the 2018 World Cup was accompanied by a consumer spending boom.

Belarus continues to service its foreign debt in Belarusian rubles and its new budget will focus on assuring political-economic control in the country. Meanwhile, growth and real income is decreasing across the country.

Widely seen as a marriage of convenience, economic ties between Russia and China are rapidly deepening as the two countries are driven together by pressure from the West.

Traditional export markets for Georgian wine are reeling due to the war in Ukraine, deepening ongoing trends of market diversification among winemakers in the South Caucasian country.

Foreign investment has transformed Eastern Europe, says wiiw report
10 hours ago
Will Croatia’s latest shot at World Cup glory ease economic slowdown?
1 day ago
Belarus’ government to expand political-economic control at the expense of economic growth
1 day ago
Sino-Russian ties continue to deepen as Western sanctions drive their economies together
2 days ago
War and wine: how rattled economies in Ukraine and Russia are pushing Georgian winemakers to pivot to new markets
2 days ago