ING: Czech economy slows, and expected to slow down further 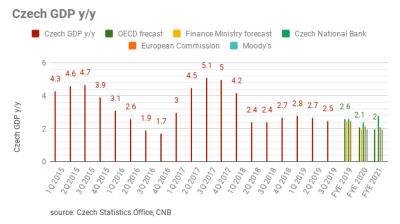 Czech economy slowed to 1.8% in 4Q19 while the PMI manufacturer's index and industrial production has collapsed in the last year
By ING Think March 3, 2020

Czech economy slowed to 1.8% in 4Q19, but domestic demand remained surprisingly strong. But given the rising uncertainty amid Covid-19 outbreak, we expect growth to dip below 2% this year but the market pricing of almost four rate cuts are a bit too aggressive and premature in our view.

Surprisingly, domestic demand came in above expectations as households consumption accelerated to 3.2%, and fixed investments to 3.6% y/y after somewhat weaker previous quarters. Inventories contributed also very positively so total investments growth reached 8% y/y. On the other hand, foreign demand disappointed, mainly goods exports fell by 2.2% y/y in 4Q19 after average growth of around 2% in previous quarters.

These are the weakest numbers since 1Q13.

As such, net exports contributed to growth by negative 2.2 ppt in 4Q19 as a result of weaker forging demand of 2019 related to trade-wars, Brexit uncertainty and troubles in the automotive segment, mainly in Germany.

Still, despite better than expected domestic demand of the Czech economy, 4Q19 figures provide just limited guidance to this year’s development given Covid19 outbreak, which is the main interest of the market right now.

Outlook remains unclear, but growth to be below 2% We expect the Czech economy to grow by 1.9% this year, which belonged to more negative estimates while market consensus was slightly above 2% before Covid-19 panic intensified at the end of February.

But given the recent market turmoil and slowdown in the global economy, it is becoming clear that the Czech economy is likely to decelerate below 2% this year. OECD revised global economy growth downwards by 0.5 ppt and eurozone growth by 0.3 ppt this year.

As such, risks for Czech economy growth are also tilled to the downside, though figures will be gradually adjusted based on developments in the coronavirus outbreak and its damages to the global economy.

Rate cuts expected by the market not likely Markets are starting to expect rapid central banks reaction to support global economic growth, which has pushed the market to price in four rate cuts from the Czech central bank until the end of the year. However, we do not see such aggressive move as realistic given the specifics of CZK after the FX floor regime and its lack of sensitivity to interest-rate differentials abroad and the Bank's focus on inflation targeting.

Even with global central banks delivering rate cuts, the Czech central bank does not need to follow in such an aggressive way as the koruna will not be appreciating as strongly due to monetary easing abroad. This was also the case in 2019 during Fed/ECB easing.

If the situation worsens further, some insurance rate cuts are imaginable in 2H20 but almost four cuts seem to be too aggressive and premature in our view.

A case filed by Armenia against Azerbaijan in the International Court of Justice could have significant implications for the conflict. And it carries risks for both Armenia and Azerbaijan.

In the push for reducing carbon, significant investment will be necessary, and in turn, funding will be required. This will provide growth for the credit market, and in particular for anything associated with ESG.

COMMENT: Risk premiums in Central Europe during the COVID era do surprisingly well

In times of crisis there is a fight to quality by bond traders who are keen to reduce their risks. However, in this crisis the countries of Central Europe have done surprisingly well thanks to ECB support.

With the rapid economic recovery phase now behind us and the peak of the fourth COVID wave just ahead, the Romanian economy is starting to feel the need for additional growth drivers.

The Communist Party of the Russian Federation massively improved its standing following the elections for a new Duma, but was robbed of the much larger share it actually won. The question now is what – if anything – can the KPRF do?