Hungary’s retail sales up 5.7% in October 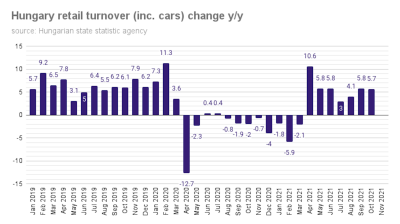 Retail sales in Hungary rose 5.7% y/y according to both adjusted and raw data, down from 5.8% in the previous month, the Central Statistics Office (KSH) said on December 3. The figures were slightly over projections.

On a monthly basis, retail sales rose 0.3%, half the pace as in September.

Hungary’s retail sales plunged after the breakout of the pandemic in the spring of 2020 and the rebound was less robust than expected against the backdrop of dynamic wage outflows. Since last summer the growth was moderate and consumption still remains below pre-crisis levels. Economists attributed the slump to higher spending in the service sector and rising saving propensity.

Retail sales and services are expected to lend support for Q4 GDP, while industry and construction continue to face supply constraints and a labour crunch, holding back their performance.

Online and mail-order sales increased by 11.9%.

In absolute terms, retail sales reached HUF1.28 trillion (€3.5bn) at current prices, which is the highest level this year. It also exceeds 2019 and 2020 December data.
Food sales accounted for 44% of the total, non-food sales for 38%, and vehicle fuel sales 18%.

In the first nine months, retail sales rose 3.1% y/y, according to both unadjusted and adjusted data. Adjusted food sales were up 2.1%, non-food sales rose 4.4% and vehicle fuel sales increased by 4.2%.

Fresh data shows that households are still spending on services, rather than goods, which is why retail sales still haven't fully recovered to pre-crisis levels, according to Erste Bank.

Retail sales are expected to accelerate to double-digit growth in 2022 from 3.4% this year, spurred by massive transfers such as the tax rebate for families, the 13th-month pension and the planned six-month bonus for police officers and the increase in the minimum wage, Takarekbank said.

COMMENT: Emerging European tightening cycle coming to an end
Hungary's industrial output picks up in June, but outlook mixed as economy set to slow down
Hungarian consumers cut back spending in June

Unemployment slightly rose in Czechia in July
2 hours ago
Moldova’s maize, sunflower crops decimated by drought
3 hours ago
North Macedonia’s annual inflation accelerates to 16% in July
16 hours ago
Romania’s central bank slows down monetary normalisation cycle with a 75bp hike
1 day ago
Hungary's industrial output picks up in June, but outlook mixed as economy set to slow down
1 day ago