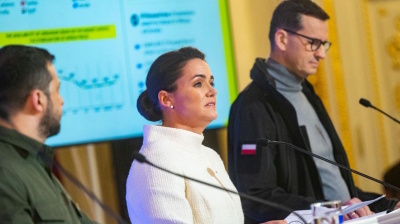 Hungarian President Katalin Novak (centre) is the highest-ranking Hungarian politician to visit the country since the Russian invasion. / Facebook
By Tamas Csonka in Budapest November 28, 2022

Hungary's President Katalin Novak travelled to Kyiv to meet her Ukrainian counterpart Volodymyr Zelenskiy on November 27 in a visit widely seen as an attempt by Hungary’s pro-Russian Prime Minister Viktor Orban to score good points as the country faces the suspension of vital EU funds..

Novak is the highest-ranking Hungarian politician to visit the country since the Russian invasion.

Hungary’s first female president, previously a deputy of Fidesz, was invited by  Zelensky to participate in the Grain from Ukraine humanitarian scheme launched on the 90th anniversary of the Holodomor, the great Ukrainian famine of 1932/1933, to promote grain exports to countries in Asia and Africa that are the most vulnerable to famine and drought.

Novak traveled via Poland by train to the war-stricken capital.

"Securing the food supply chain and the undisturbed flow of goods is not only a dry issue of free trade or market economy but a matter of life and death," Novak said, adding that Hungarians were not only aware of the horrors of the Holodomor, but belonged to the few nations that commemorate the tragedy.

She cited a memorial in central Budapest, near Elizabeth Bridge, and the Hungarian parliament holding a commemoration on the anniversary. Parliament has given unanimous support to a resolution issued about the great famine, she added.

Novak said it was everyone’s duty to help victims and those in need, adding that the greatest humanitarian scheme in Hungary’s history was underway, launched to help Ukrainians.

"Vladimir Putin’s responsibility for this war is crystal clear," she stressed.

In June, the Ukrainian President invited Hungary’s rightwing prime minister to Ukraine, but there has been no reaction from the prime minister’s office since. Orban is considered Russia’s closest ally in the EU and has bashed EU sanctions against Russia, despite having approved all measures introduced by Brussels, except those related to gas, oil and nuclear energy.

The government launched an advertising campaign and a consultation survey to gauge the view of Hungarians on sanctions, but the guided questions are widely seen as a communication tool to push the blame on the EU for the deteriorating economic situation as Hungarians face surging food and energy prices.

Hungary’s strongman has annoyed its allies by delaying the ratification of the Nato accession of Finland and Sweden and blocking support to Ukraine. To ease the pressure and show some sign of cooperation, Orban announced that Budapest would provide €187mn in financial aid to Ukraine as its contribution to a planned EU support package worth up to €18bn, but rejected the idea that the EU should take out a loan to help the war-stricken country.

Novak met with ethnic Hungarians in Transcarpathia on Sunday. There were 150,000 Hungarians living in Ukraine’s western region before the war, but tens of thousands have fled since.  Novak said that 500 Ukrainian-Hungarians who fought in the war were wounded or died since the war broke out.

Novak's visit to Ukraine triggered a sense of confusion among Fidesz voters and unveiled what has already been a constant and deep anti-Ukrainian sentiment among the radical-right voters, many of whom support Our Homeland party, which passed the 5% threshold in the April election.

Social media, including Novak’s own Facebook page, was flooded with furious comments, calling the president’s visit a shame or the Ukrainian leadership a Nazi regime, but many comments were simply anti-Semitic rants.

With his anti-EU and anti-Western rhetoric, Orban has successfully turned Fidesz’ moderately pro-EU voting base to become a staunch supporter of Russian President Vladimir Putin.

Among Europeans, the proportion of Hungarians blaming Ukraine for the war is the highest.

A recent report by Political Capital unveiled the operation of a covert Russian online troll network active in Hungary.

Pro-Russian trolls have consistently spread the same three or four narratives to justify the war, most intensively just after the war broke out, according to the report. This is intensified by the pro-Russian narratives used by pro-government media, including state media and pundits on social media.