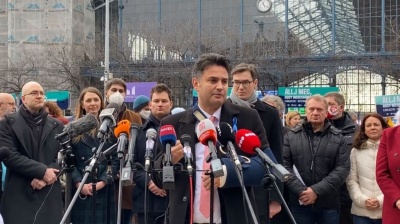 After a sluggish start in late 2021, the signature drive gained momentum in early January and after President Janos Ader set the election day for April 3.

One referendum question is about extending the jobseeker's allowance from three months, the lowest in the EU, to nine months. The second referendum question is: "Do you agree that parliament should declare void the 2021 act on the Foundation for Fudan Hungary University and the transfer of assets to the Foundation for Fudan Hungary University?"

Investigative news site Direkt36 broke the story in the spring that Hungary would finance the construction of the local campus for the elite university in Budapest.

The project, planned at an industrial rust zone in the south of the capital, has come under fire as Budapest with the government’s assistance was planning to build a Student City on the same plot. The opposition argues that the 520,000 sqm large campus, costing Hungarian taxpayers HUF540bn (€1.5n) would reduce the area for student dormitories.

The controversial plan has divided Fidesz voters and, seeing the lukewarm reception, the government was forced to go on the defensive on the issue.

Fidesz officials communicated that the project would not go ahead yet and promised to abide by the outcome of a referendum. But behind the background, legal preparations were taken to continue the project after the elections, if Fidesz wins.

The contentious project has united the opposition, which is running on a single list in the high-stake elections. Polls show the ruling party with a small lead, as the alliance appeared to lose some ground in late 2021 after a successful primary election in the autumn.

Now that the legal barriers are cleared, the main question is whether the government would allow the oppositions’ referendum questions to be held on the same day as the election. If so, it could give a boost to the six-party alliance to mobilise its votes, but clearly, that goes against the interests of the ruling radical rightwing party.

It has already been decided that the anti-LGBT referendum, referred to by the government as the "child protection law", would go ahead on April 3. Hungarians will vote on whether to allow "LGBT propaganda" in schools or gender-reassignment treatment for minors.

Viktor Orban, who could be Hungary's longest-serving democratically elected leader with a fourth consecutive win, is hoping to score political points over the divisive issue and solidify its conservative core base.

The referendum follows the approval of the controversial LGBT regulation last year, which many see as conflating sexual diversity with paedophilia.

The law prohibits the portrayal of homosexuality and gender reassignment in content, like school education material and television programmes, that is addressed to minors. The Hungarian regulation prompted widespread outrage, and the European Commission launched an infringement procedure.

Having the government-initiated referendum questions posed on election day gives the ruling party a further advantage. Although the campaign has not even officially started, the LGBT issues dominate discourse in pro-government media.