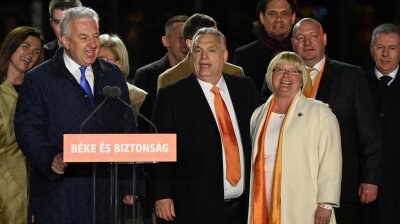 The Hungarian government will require companies in a wide range of sectors to contribute extra profits to two funds that will cover the cost of utility price subsidies as well as the development of the armed forces, Prime Minister Viktor Orban announced on May 25 after a cabinet meeting.

The windfall taxes are designed to fill holes in the budget, where the deficit has soared because of the government's spending splurge before the election in April, where it won re-election in a flawed process.

"The war is protracted, Brussels' sanctions policy is not improving, and together these will lead to a drastic rise in prices", Orban argued for the measure. Meanwhile, banks and big multinational companies are amassing bigger gains and extra profit through rising interest rates and higher prices, he said.

“The government decided to set up a utility protection fund and a defence fund. From these, we will pay the costs of the regulated utilities price system and the strengthening of the armed forces," the prime minister posted in a Facebook post on Wednesday night.

Banks, insurance companies, large retail chains, energy and trading companies, telecoms and airlines will have to pay a large part of their extra profits into these two funds. The measure will be temporary, limited to two years: 2022 and 2023.

The extra tax will not affect manufacturing companies, such as automobile companies, which account for a third of industrial output, or pharmaceutical companies.

The construction industry also looks likely to be spared the tax. The sector is dominated by companies close to the government. Hungary’s most powerful oligarch Lorinc Meszaros won’t have to worry about chipping in to save the regulated energy price scheme of the government.

Six weeks after winning the election, the government has yet to unveil a viable deficit reduction programme. Earlier this week, the National Bank issued a list of 144 recommendations to speed up Hungary's convergence and called for a swift reduction of the deficit.

The cabinet revised the 2022 target by 1pp to 4.9% by postponing HUF755bn of state investments at the end of 2021, but analysts called for more aggressive measures to keep the budget shortfall below 5%.

Analysts forecast a budget deficit of 7-8% without fiscal adjustments and the current account to widen by the same clip in 2022, as Hungary's energy bills are set worsen sharply.

The latest announcement is both a confirmation and the first open admission by the government about the dismal state of public finances, according to commentaries.

When introducing Marton Nagy, his new minister for economic development, to lawmakers in parliament on Tuesday, Orban said Hungary needs innovative economic policy measures that break with convention. Nagy, the former deputy governor of the National Bank, left his post in 2020 to become the chief economic advisor of the prime minister.

Price caps are also putting a big strain on public finances and the government will likely have to step in to cover the expected large losses of mostly state-owned utility companies, which are currently bearing most of the cost of rising energy prices. The regulated retail energy price, in place since 2013, is likely to widen the deficit by 1.2% of the GDP, according to the European Commission’s latest country report.

Hungarian stocks ended the day deep in the red as rumours circulated of the windfall tax hitting large companies. Investors were edgy all day, waiting for the prime minister’s announcement, which came hours later, after the bell.

As expected, investors were not happy about the government’s new policy measure, details of which will be revealed at a weekly press briefing on May 26. The EUR/HUF swiftly moved from 388 to 395 on the announcement. One euro was hovering near HUF381 a day earlier.

The slowdown in the pace of monetary tightening from May, flagged by MNB deputy governor Barnabas Virag on Tuesday, triggered a sell-off in the currency. The forint also weakened against the zloty on news that the European Commission could adopt the Polish recovery plan within days.