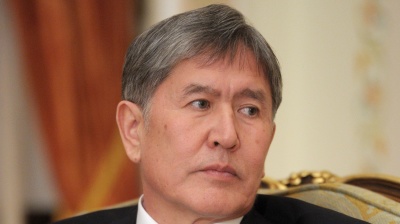 Former Kyrgyz president Almazbek Atambayev remains barricaded in his residence, having openly warned the authorities that he is armed.

Atambayev is embroiled in a bitter row with his successor President Sooranbai Jeenbekov, who on taking office in late 2017 was seen by many observers as likely to become Atambayev’s puppet.

Atambayev is still holed up after, on July 18, refusing to obey a third subpoena, delivered to his residential compound in the village of Koi-Tash near the Kyrgyz capital Bishkek, Azattyk reported. Under Kyrgyz law, refusal to obey two subpoenas makes a person liable for forcible detention for questioning.

The latest subpoena said Atambayev must report to the Interior Ministry in Bishkek for questioning as "as a witness at 10 a.m. on July 19" in an unspecified criminal investigation.

Lawmakers lately stripped Atambayev of his official ex-presidential status, removing his immunity from prosecution. He currently faces five counts of misconduct in office when he was president during 2011-2017 including corruption, abuse of office, and illegally enriching himself.

His refusals to comply with the subpoenas are, he says, based on the grounds that the authorities’ decisions in pursuing him were “illegal”. Atambayev and his lawyer, Sergei Slesarev, claimed amendments to the law, passed in May to allow immunity to be taken away from ex-presidents, were unconstitutional.

If there is a successful prosecution of Atambayev, the political atmosphere in a Central Asian country known for its political volatility could become even more toxic. Jeenbekov himself, when he steps down, could find himself experiencing some degree of paranoia that he will be pursued by his successor.

Atambayev became locked in a power struggle with his successor and former ally Jeenbekov over control of the Social Democratic Party of Kyrgyzstan (SDPK) and influence in Kyrgyz politics.

The relationship between the two men took an antagonistic turn after Atambayev re-entered the limelight as head of the SDPK in 2018 and publicly criticised Jeenbekov for failing to deal with a major winter power outage. This prompted a long-running crackdown on Atambayev’s allies and a rift within the SDPK. The conflict eventually led to the signing into law of the bill to strip former presidents of immunity for "especially serious crimes” by Jeenbekov in May.

On July 3, Atambayev left his compound to speak at a rally in Bishkek. At the rally, around 1,000 of his supporters demanded that all of the charges against him be dropped.

Ukraine appoints new top management of power generation major Centrenergo, Kolomoisky physically bars them from office
18 hours ago
Russia’s RTS crashes below 1,400 in the worst sell-off since 2008 as coronavirus pandemic fears grip emerging markets
21 hours ago
Poland’s stock market suffers heavy losses amidst fears of coronavirus spread
23 hours ago
General election 2020: Slovakia on the eve of political changes
1 day ago
Azerbaijan ambassador pledges to increase investments in Ukraine 'up to $1.5bn-$2bn' in 2020
1 day ago