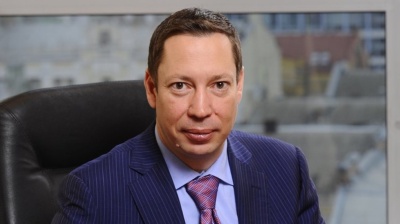 The former head of the NBU, Kyrylo Shevchenko, is under criminal investigation only days after stepping down from his post. / bne IntelliNews
By Dominic Culverwell in Berlin October 7, 2022

The head of the National Bank of Ukraine (NBU), Kyrylo Shevchenko, is under criminal investigation following allegations of fraud, Economic Pravda reported on October 6.

Shevchenko, who resigned earlier this week due to “health concerns”, is under investigation by Ukraine’s Anticorruption Bureau (NABU) and the Specialised Anticorruption Prosecutor's Office (SAP) over missing funds amounting to UAH206mn ($5.58mn) during his leadership of the state-owned Ukrgasbank. His current whereabouts are unknown.

SAP and NABU exposed the illegal activities of Ukrgasbank’s officials, which led to losses of more than UAH206mn. In a Facebook statement, SAP mentioned that the bank’s management, having information about banking service contracts concluded with large clients, used it to embezzle funds.

“The bank's officials ensured the conclusion of fictitious contracts with individuals and legal entities, who allegedly, being "agents" of the bank, attracted large clients to it. For such "agency services", the bank illegally paid monthly "remuneration" to these persons,” SAP stated.

The investigation established that during 2014-2019, under Shevchenko’s management, 52 fictitious agents were unjustifiably transferred state bank funds worth more than UAH206mn. Five participants have been identified, including Shevchenko, as well as former and current high-ranking officials of banking institutions.

SAP emphasised that Shevchenko’s actions during his time at Ukrgasbank are currently not related to his performance at the NBU. He joined the NBU in July 2020 but announced his resignation on October 4. In his announcement, he thanked Ukrainian President Volodymyr Zelenskiy and his colleagues at the NBU.

“Since my first days of office, I had to act primarily as a crisis manager and I fulfilled my mission by ensuring uninterrupted operation of the financial system during the extremely difficult times of a full-scale war,” Shevchenko wrote on Facebook. “The war was yet another difficult test for our team and for me personally. I think we have passed it with dignity.”

He noted that since the start of Russia’s full-scale invasion, the NBU had ensured uninterrupted operation of the financial system, prevented panic in FX market, put a stopper in the large-scale capital outflow to protect the reserves, kept inflation at an adequate level and supported the state budget with over $10bn, understanding the difficulty of raising money elsewhere during the war.

After his appointment, Shevchenko continued the clean-up of the banking sector prior to the war, winning a reputation as a highly competent manager, and continued the work of his predecessors Valeria Gontareva and Yakiv Smolii, who cleaned up the sector starting in 2014, and all ran prudent monetary policies.

Shevchenko raised eyebrows with some controversial staff decisions, sacking some well-respected members of the board from Smolii’s tenure, but overall he was overwhelmingly praised for his management of the sector.

“My role at the NBU is to ensure the bank operates on an independent basis,” said Shevchenko in an interview with bne IntelliNews in 2021, his first ever interview with the international press.

Shevchenko was officially dismissed from his post by the Ukrainian Parliament on October 5.