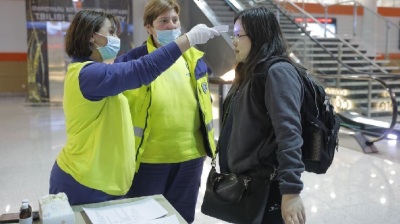 Georgians returning from Azerbaijan have brought the coronavirus with them.
By bne IntellIiNews February 26, 2020

Georgia has reported its first case of coronavirus, local media said on February 26.

Georgia is the first Caucasus country to confirm a case of the deadly virus, which has swept through nearby Iran in recent weeks killing 19 people of all age groups. Azerbaijan, meanwhile, has reportedly quarantined more than a dozen people in the southern city of Jalilibad following suspicion they were carrying the virus.

Health Minister Ekaterine Tikaradze said an infected Georgian man, who was travelling from Iran via Azerbaijan, was hospitalised upon entry to the country.

"He was immediately taken to hospital from the border checkpoint," she said.

The minister added the man had arrived back in Georgia via Azerbaijan on a 12-person minibus. The other passengers on the bus are also now believed to be in isolation.

"Coronavirus positive was only in one case," Tikaradze added.

Earlier, Georgia closed its borders to Iranians entering, following the outbreak in that country, but remained open to citizens of nearby Azerbaijan and returning nationals.

“The government of Georgia is in constant communication with the Iranian authorities in order to receive the updates about the situation on the ground and the current preventive measures there,” the foreign ministry said in a statement.