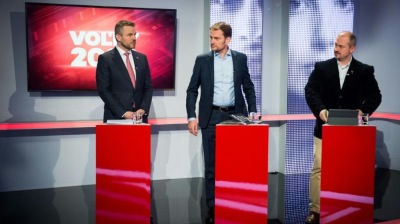 The last polls showed OLaNO of “man of the people” Igor Matovic overtook the incumbent Smer-SD and leads by four points on the eve of elections
By bne IntelliNews February 28, 2020

On stage are the bombast of the far-right People’s Party (LSNS) of Marian Kotleba, the unexpected rise of opposition OLaNO of Igor Matovic, and the incumbent Smer-SD, which is expected to lose some of its voters.

All these characters play with a backdrop of the murder trial of the investigative journalist Jan Kuciak and his fiancee Martina Kusnirova, which has exposed links between shady figure business Marian Kocner and Slovak politicians.

The eighth general election in the history of the independent Slovakia is expected to bring change. Based on the latest non-public election polls, it looks like up to 7 parties could get into parliament.

Two weeks ago Smer-SD was the clear frontrunner to win, according to recent polls. In mid-January, Smer-SD would have taken 18.7% of the vote, while its both government partners the Slovak National Party (SNS) and Most-Hid would have received 5.1% and 4%, respectively.

In second place in the general election was LSNS with 13.6% of votes, according to the polls, followed by For the People of former president Andrej Kiska with 10.3%, the Progressive Slovakia-Together coalition with 10.5%, OLaNO with 7.7% and Christian Democrats with 6%.

But a few short weeks later and the running order changed. In mid-February polls, Smer-SD’s preferences fell slightly to 17%, followed by growing OLaNO with 13.3% and LSNS with 12.2%. The Progressive Slovakia-Together polled at 9.3%, For the People 8.2%, We Are Family 7.8%, Christian Democrats 5.4% and Freedom and Solidarity (SaS) 5.3%. Both SNS and Most-Hid (with 4.4% and 4.2%, respectively) will not make it into Parliament at all, according to the polls.

However, according to a non-public poll carried out by Focus and AKO agencies for the 50dni.sk initiative on February 20 to 24 on a sample of 2,000 respondents, OLaNO of “man of the people” Igor Matovic jumped into first place with 19.1% of votes, leaving Smer-SD with 15.6%in second place. The results of non-public survey could be published only outside Slovakia.

Kotleba’s LSNS would have gained 9.8%, followed by the Progressive Slovakia-Together with 9.4%, We Are Family with 7.2%, SaS with 7%, For the People with only 6.6% (down by 2 percentage points). Other parties such as Christian Democrats, Most-Hid and SNS were expected to fail to clear the 5% threshold needed to enter parliament.

The incumbent Smer-SD is now in trouble. Based on latest polls results, the populist Matovic who created his OLaNO movement (Ordinary People and Independent Personalities) to tackle corruption in Slovakia’s public life, has the best chance of becoming Slovakia’s next Prime Minister.

“Who wouldn't have [the ambition to become the prime minister]? Every political party chairman has that ambition if he really wants to move Slovakia forward and wants to make Slovakia a good place to live,” Matovic commented on February 25 for the Slovak News Agency.

He expects the voter turnout in the election to exceed 70%. “My dream is a 75% turnout, which would be significantly more than it was last time. I feel that we can achieve something like that together. The unpublished polls also show that we've woken a sleeping dragon,” he added.

Despite the fast that the far-right neo-Nazi Kotleba’s LSNS has increased his pool of support lately, the current non-public results show that the party will fail to get into parliament. However, as Smer-SD’s only chance of remaining in power now seems to be a minority government, it might be forced to turn to LSNS for help.

In terms of key economic challenges, a coalition of the Progressive Slovakia-Together pay the most attention to it in its program, followed by For the People, SaS, Christian Democrats and OLaNO, according to the evaluation of the Slovak Economic Society (SES) published on February 24.

“The party with the highest coverage rate of key economic questions and their possible solutions was the coalition Progressive Slovakia-Together (76%), followed by For the People (71%), SaS (68%), Christian Democrats (66%) and OLaNO (64%),” the report read.

Smer-SD and LSNS did not publish their economic programme, thus failed in the final SES evaluation.

The Progressive Slovakia-Together coalition was ranked the best in the areas of sustainable development and environment protection, quality, effectiveness and transparency of public administration, population aging and sustainable public finances, R&D support, and equality and social cohesion.

OLaNO dominated in the development of science and research, SaS in the effective judiciary, strengthening rule of law and law enforcement, and both Christian Democrats and For the People in inclusive labour market and integration of excluded communities.

Slovakia’s President Zuzana Caputova called upon voters to go vote. “Let us not be discouraged, let us not be scared, let us not quarrel and let’s trust one another. Please, let’s have in mind that the election isn’t the end of the road. It’s the beginning of a new stage. We’ll all breathe the same air after the election, we’ll coexist here and create our future,” cited by the Slovak News Agency.

PM Peter Pellegrini (Smer-SD) stressed that because of the election, people have a unique opportunity to influence life in the country. “No one else, only the citizens of the Slovak Republic have the right to choose who they will give their mandate to manage public affairs to.”

A total of 25 political parties will be running in the election, which will cost over €12.6mn. There are over 4mn eligible voters in the country.

The parties to run in the election are Smer-SD, For the People, the Progressive Slovakia-Together coalition, Most-Hid, Ordinary People and Independent Personalities, Freedom and Solidarity, the Slovak National Party, Kotlebovci-People's Party Our Slovakia, the Christian Democratic Movement, Magyar Kozossegi Osszefogas-Hungarian Community Solidarity, 99%-Civic Voice, Good Choice, Voice of the People, Voice of the Right, We've Had Enough of This!, Work of the Slovak Nation, , the Slovak League, Andrej Hlinka's Slovak People's Party, the Slovak Revival Movement, We Are Family, Smer-Social Democracy, Socialisti.sk, Solidarity-Working Poverty Movement, Mayors and Independent Candidates, Homeland.