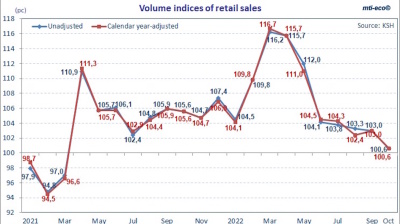 Annualised Hungarian retail sales growth slowed to 0.6% (chart) in October from 3% in the previous month as food sales fell for the fifth month in a row, down 5.6% y/y, and non-food sales edged 0.9% lower.

Motor fuel sales jumped 20% y/y as fuel prices remained capped at HUF480 per litre (€1.2), the lowest in Europe. Excluding this sub-index, Hungary’s retail sales would be in negative territory.

The government has made the first steps in communicating the phase-out of fuel subsidies from 2023 this weekend, as demand remains robust, but supply crunches are seen due to lower imports because of market intervention.

MOL, as the only wholesaler left on the market, is struggling to keep up with robust demand at a time when its Hungarian refinery is working at 55-60% capacity. The possible end of fuel imports from MOL’s Bratislava refinery, due to the sanctions of Russian crude and refined crude products, would lead to widespread shortages on the Hungarian market if demand remains unchanged, making the subsidy scheme untenable, analysts said.

In absolute terms, retail sales came to HUF1.52 trillion (€3.71bn) in October. Food sales accounted for 46% of the total, non-food sales for 36% and sales at petrol stations for 18%. The volume of mail orders and internet retailing – accounting for 7.8% of all total sales and involving a wide range of goods – fell by 1.7%.

On a monthly basis, sales fell 0.4% as consumers, faced with higher energy bills and the highest food inflation in the EU, are cutting back spending.

Retail sales in the first half were boosted by double-digit wage growth and massive pre-election transfers. The annual data showed sales growth slowing every month since April as inflation continued to trek upward, eating up robust wage growth.

Analysts say the deceleration of the retail sector will be even more pronounced as rising energy bills will set back consumer spending in the winter, leading to a decline in GDP. Economic output contracted 0.4% q/q in the July-September period, seen as the first leg of the expected technical recession.

The detailed breakdown shows that there were hardly any categories in the non-food segment that grew on an annual basis in October. Sales decreased by 0.6% in furniture and electrical goods stores. Shoes, clothing and textile sales dropped 1.3%, and sales fell 2% in pharmaceutical and medical goods and cosmetics.

The National Bank of Moldova slashed by 3pp to 17% the monetary policy rate, announcing expectations for quick disinflation throughout this year and hopes for the annual inflation to enter the target band (5% +/-1.5pp) in the second quarter of 2024.