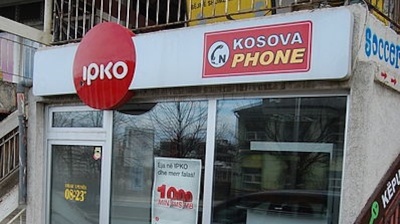 The planned sale of Telekom Slovenije’s Kosovan subsidiary Ipko is the latest example of the tendency towards consolidation in the Balkan region, and is expected to attract bids from regional players, Fitch Solutions said.

Telekom Slovenije announced on July 5 it started procedures to sell 100% of its Kosovan subsidiary Ipko Telecommunications as part of its strategy which includes the possibility of further consolidation through expansion or disinvestment.

Ipko is the second largest operator in Kosovo with a market share of 36.1% in the mobile telephony segment in the first quarter and around 44% in the broadband fixed access segment.

Vala has the biggest market share in Kosovo of 50%. The two smaller mobile providers are ZMobile with market share of 12.3% and Serbia’s mts (1.6%).

The trend of consolidation of the telecoms industry in the Balkan region is driven by the focus of some operators on core markets and regional players looking to cement their footprint in the region, Fitch Solutions said on July 10.

“We identify four players interested in expanding their presence in CEE for whom Ipko’s sales could represent an attractive investment,” Fitch Solutions noted.

The first potential bidder is Telekom Srbija, which over the last ten months has been following an aggressive expansion strategy across the Balkans.

Telekom Srbija acquired local cable operators in Serbia and Bosnia & Herzegovina, with the latest acquisition occurring in July 2019. The telco is expected now to turn its interest to neighbouring Kosovo after it entered the Kosovan market with the launch of mobile services in 2017 under its brand mts.

If Telekom Srbija acquires Telekom Slovenije’s operations in Kosovo, its position there would be considerably strengthened, as it would become the first and the second player respectively in the wireline and wireless broadband markets.

The Austrian A1 Group, formerly known as Telekom Austria, one of the biggest players in the Balkans, also could look for further expansion in the region by entering Kosovo market.

The company’s possible entry could boost Ipko’s position particularly in the wireless segment, where the operator could seek to raise competitive pressures faced by the incumbent number one mobile operator in Kosovo, Vala.

Furthermore, A1’s capabilities in offering bundled services could support the transformation of Ipko into a strong converged player.

According to Fitch Solutions, the third bidder for Ipko could be United Group, controlled by private equity group BC Partners, which is a strong regional player in the fixed and pay-TV markets, particularly in Serbia, Montenegro, Slovenia and Bosnia. The company recently bought Tele2’s operations in Croatia, expanding beyond the wireline segment and acquiring mobile assets.

“Although we believe United Group remains a possible bidder, it may wish to focus investments in Croatia in the short-to-medium term in order to fully establish itself there,” Fitch Solutions said.

The controlling shareholder of Bulgaria-based Vivacom, businessman Spas Roussev, is reportedly looking to expand its footprint across the Balkan region, after acquiring part of Telekom Albania in early 2019.

Ipko’s sale could therefore represent an opportunity for Spas Roussev to continue his expansion project.

According to Fitch Solutions, PPF won’t be among the possible bidders as it believes that the group would not be interested in Ipko due to its limited size and presence only in Kosovo.

“Beyond Kosovo, the next battleground will be Romania, as Deutsche Telekom is looking sell its operations in the country. Roussev had already expressed interest in acquiring Telekom Romania’s assets in early 2019, but he will face competition in securing a deal,” Fitch Solutions concluded.

37 of 50 ranked companies were active in software sector.