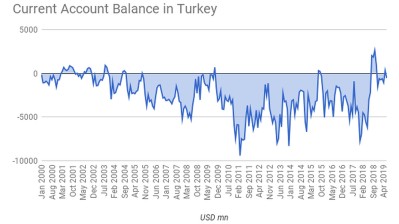 Turkey’s 12-month rolling cumulative current account balance was not in deficit in June for the first time since November 2002, with a surplus of $538mn posted, the country’s central bank announced.

However, the data for the monthly current account showed a more-than-forecast June deficit of $548mn, down from $3.01bn a year ago. The market consensus was for a deficit of $265mn in the month, according to a Reuters survey.

Economic activity in Turkey fell hugely following the Turkish lira crisis last summer that sparked a recession. The currency crunch caused the price of imports to surge, leading to the marked reduction in the current account deficit. Investors will be worried at how the 12-month current account deficit was eliminated by a fall in imports rather than a rise in exports. Imports in the first half of the year dropped almost 19%, while exports rose just under 4%, the central bank’s data showed.

Seker Invest said it expected the 12-month rolling current account surplus to reach around $4bn in July and to continue rising until October. Serkan Gonencler of the Istanbul-based brokerage outlined the forecast scenario in a research note.

“Deficit widening again!”
Robin Brooks of the Institute of International Finance (IIF) said in comments posted on Twitter that the greater-than-expected June current account deficit had caught his eye. “Last summer I was more positive on Turkish Lira than Argentina's Peso, because I thought the BoP sudden stop and resulting credit crunch would quickly turn Turkey's trade deficit into surplus. But repeated credit expansions have prevented that. Trade deficit is widening again!” he wrote.

“Underlying dynamics for the Turkish Lira are deteriorating. Export growth is falling given the weak Euro zone. That increases the need for import compression to keep the current account deficit small. But another credit expansion in Q3 is boosting domestic demand and imports...,” he added in another tweet.

Turkey’s $750bn economy was running a current account deficit of almost $60bn as recently as May 2018. The country posted a substantial current account deficit over the decade-long economic expansion fuelled by cheap credit it saw under Recep Tayyip Erdogan and his Justice and Development Party (AKP). It imported far more products than it exported and very much financed the gap with hot capital inflows.

Inan Demir, emerging market economist at Nomura, was quoted by the Financial Times as saying: “These numbers suggest that this is very much a cyclical improvement in the external balance, and that if the economic cycle turns again in the direction of growth, then the current account balance will once again swing to deficit.”

Ukraine appoints new top management of power generation major Centrenergo, Kolomoisky physically bars them from office
18 hours ago
Russia’s RTS crashes below 1,400 in the worst sell-off since 2008 as coronavirus pandemic fears grip emerging markets
21 hours ago
Poland’s stock market suffers heavy losses amidst fears of coronavirus spread
1 day ago
General election 2020: Slovakia on the eve of political changes
1 day ago
Azerbaijan ambassador pledges to increase investments in Ukraine 'up to $1.5bn-$2bn' in 2020
1 day ago