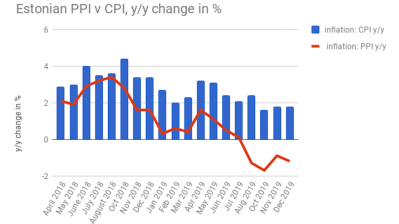 The reading shows deflation deepened in the twelfth month after registering a fall of 0.9% y/y in November. The headline figure also sees the PPI inflation rate below zero for the fifth consecutive month after an uninterrupted growth period had lasted nearly three years prior. On a monthly basis, the index retreated 0.9% in comparison to a fall of 0.1% m/m the preceding month.

The annual PPI fall in December came on the back of prices declining 17.5% y/y in electricity, gas, steam, and air conditioning supply after a fall of 10% y/y in November.

In the manufacturing segment, the index slid 0.1% in December after a fall of 0.5% y/y the previous month.

The PPI also fell 9.4% y/y in the water supply segment in December, compared to a decline of 0.9% y/y in November.

Prices increased 2.9% y/y in the mining and quarrying sector in December, compared to a growth of 4% y/y in the eleventh month.

In m/m terms, PPI declined 0.3% in the manufacturing sector. There also were falls in the mining and quarrying and utility sectors, at -1.4% m/m and -7.7% m/m, respectively.

The Board of the Central Bank of Russia has resolved to maintain the key interest rate flat at 4.25% in its policy meeting of September 18. The economy is doing well, but geopolitical tensions are rising