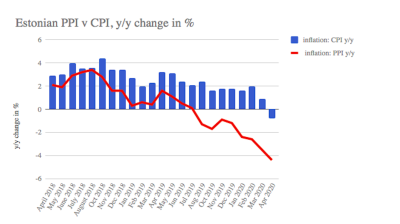 The reading showed a further deepening of PPI deflation after the index fell 3.5% y/y in March. The headline figure also sees the PPI inflation rate below zero for the ninth consecutive month after an uninterrupted growth period, which had lasted for nearly three years prior.

On a monthly basis, the index declined 0.3% in April, compared to a fall of 0.9% m/m the preceding month.

The annual PPI fall in April came on the back of prices nose-diving 27.7% y/y in electricity, gas, steam, and air conditioning supply; that followed a decline of 24.7% y/y in March.

In the manufacturing segment, the index fell 2.8% in April after retreating 2.1% y/y the preceding month.

The PPI also fell 9% y/y in the water supply segment in April, repeating the decline rate seen in the third month.

Prices increased 2.4% y/y in the mining and quarrying sector only in April, compared to growth of 4.9% y/y the preceding month.

In m/m terms, the PPI declined 0.1% in the manufacturing sector. Factory gate prices also declined in the utility sector, at 1.5% m/m. In mining and quarrying, the PPI slid 3.2% m/m while in the water supply sector, the index did not change in monthly terms.

Sales lag below 2019 level despite bouncing back in May from their plunge in April.

May marked the twelfth consecutive month of falling industrial output in the Baltic state. The coronavirus (COVID-19) pandemic has clearly been the chief driver of the decline since March.

There was a net outflow of foreign direct investment (FDI) from Ukraine in the first quarter of this year of $1,451mn, reversing the trend of inflows of the last several years, according to data from Ukrstat.