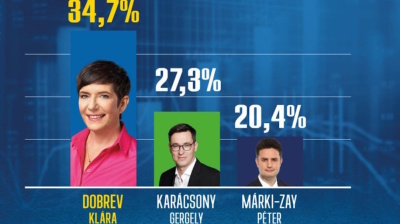 Klara Dobrev of the left-liberal Democratic Coalition (DK) won the first round of the primary elections organised by Hungarian opposition parties with 34% of the vote, ahead of Budapest Mayor Gergely Karacsony with 27%. Conservative mayor Peter Marki-Zay, an underdog in the race without a party behind him, also proceeded to the runoff, gathering 20% of the votes, according to final results published on October 1.

The top three candidates are meant to go into a run-off later this month but it looks increasingly likely that either Marki-Zay or Karacsony will bow out, enabling the other to have a clear run against Dobrev, reducing her chances of winning. Marky-Zay and Karacsony agreed on Friday that they will agree on which of them will step down next week. In case one of them is elected prime minister next spring, the other candidate will become deputy prime minister.

Over 630,000 people or 8% of the electorate cast their votes in the historic primaries to select candidates for 106 districts and for prime minister.

Voting at the first primary elections was suspended for two days just hours after Saturday’s start, following a cyber attack that crippled the IT system. Organisers talked of foreign intrusion. Voting was extended by two days and counting of the votes took another two days.

Detailed data show that the 49-year-old Dobrev, an MEP, lawyer and economist,  won the most votes (214,000) and came in first in all but nine constituencies of the 106.

Liberal Karacsony won in three districts, including the capital (168,000 votes), while Marki-Zay, the conservative mayor of Hodmezovasarhely, previously a Fidesz stronghold,  secured a win in his own district and in one constituency in western Hungary (126,000 votes).

Polls predicted Peter Jakab, president of the rightwing Jobbik party, would qualify for the second round, but the head of Hungary’s second-most popular opposition party received just 14% of the votes. Liberal Momentum’s president was dead last with just 3%.

Parties have not decided on the date of the run-off for prime minister candidates, but local media says that it would be between October 9-17.

DK, led by former Prime Minister Ferenc Gyurcsany, won in 32 districts of which Hungary’s leading opposition party is expected to win in 10 at least, according to political analysts. Jobbik won in 29 districts in mostly rural areas, and the Socialist (MSZP) will field 15 candidates in the April 2022 elections.

Of the 106 constituency seats, opposition parties should definitely win 30, where they have a more than double-digit lead over the ruling radical rightwing Fidesz, but will now be much better placed in the remaining constituencies. Another 93 seats are allocated according to party lists.

Polls show the margin in support between Fidesz and the united opposition below the margin of error, which suggests the tightest election race since 2006 when the Socialists upset Viktor Orban’s party. Fidesz won a supermajority in 2010 and retained it in 2014  and 2018, winning 133 mandates of the 199.

"We will continue our fight and will not stop until we make Hungary a democratic, European country", said Dobrev in a "victory speech" on Thursday night.

Dobrev, who could be the first female prime minister candidate, is running on a liberal agenda. She promises to adopt the euro, reduce poverty and extend the rights of LGBTQ+ people. Dobrev says she would dismantle Orban's political system, including the constitution that she considers illegitimate.

Hungary’s fragmented opposition agreed to run on a joint ticket in 2020 a year after an upset victory at the local elections when it took over half a dozen county seats and Budapest. The elections dealt the biggest blow to Viktor Orban’s party since 2006.

Analysts agree that if there is a three-party race in the runoff, then Dobrev could emerge as a winner. But if one of the candidates behind her steps down, it could diminish her chances and lead to a tight race, according to analysts.

Before the final results were out, Marki-Zay did not rule out that Karacsony should resign in his favour if there is a just minor gap between the two.

The head of the Movement for Hungary, a young organisation founded by Marki-Zay after his upset by-election victory in February 2018, could be the leading force in the anti-Dobrev coalition. The 49-year-old conservative economist and father of seven argues that the opposition has little chance of toppling Orban’s regime with Dobrev, the wife of Gyurcsany.

Many share his belief that Dobrev’s political carrier is tainted by the legacy of her husband, who is blamed for mismanagement of the economy after taking over from Socialist Prime Minister Peter Medgyessy in 2004, and the violent opposition riots two years later.

Thanks to the infamous Balatonoszod speech, the disapproval rate of Gyurcsany is one of the highest and Fidesz is putting a lot of effort into stigmatising the last politician that beat Orban in an election. At a closed fraction meeting of the ruling Socialists just after the 2006 elections, in a passionate call for reforms, Gyurcsany admitted that his party had ”fucked up” and that they had lied to people about the state of the economy.

Gyurcsany resigned as prime minister in 2009 and founded his own DK party, which has grown to become the leading force on the opposition landscape, yet his presence divides the six-party coalition.

Marki-Zay and liberal Momentum have voiced concerns about Dobrev’s chances of winning over undecided voters, as many still remember the pre-2010 era. Her candidacy would be a jackpot for Fidesz, the mayor of Hodmezovasarhely claims.

Fidesz launched a petition calling on supporters to "protest against the return of Gyurcsany to power" just before the opposition primaries.

Hungary’s state news agency issued its first story of the historic voting on Friday morning after the results were published. The state-funded organisation released numerous news during the week, quoting from mostly social media posts by government officials and pro-government analysts.

The government narrative is that whatever the outcome of the primaries, it is Gyurcsany who is pulling the strings. Both Dobrev and Karacsony are portrayed as the puppets of Gyurcsany.