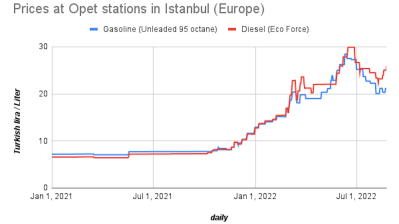 As of August 26, the diesel price will increase by an additional TRY 0.87, media reports suggested on August 25.

The record diesel price of TRY 29.94 was registered between June 16 and June 27. The record gasoline price of TRY 28.46 was seen on June 13. Diesel's annual price increase topped 316% and gasoline's exceeded 269% at the price peaks.

Gasoline prices in Turkey are automatically updated based on a formula. The variables are the Brent oil price, crack margins (CIF Med), the USD/TRY rate and the special consumption tax (SCT).

According to data from the Petroleum Industry Foundation of Turkey (PETDER), gasoline sales in Turkey declined by 3% to 3mn cubic metres (m3) in 2020, while diesel sales were flat at 30mn m3 and autogas (automotive LPG) sales were down 9% y/y to 3mn tonnes.

Consumer prices rose 22.5% y/y in November, accelerating from a 21.1% increase in the previous month.

The National Bank of Ukraine will keep the key policy rate unchanged at 25% per annum, the bank stated in a report on December 8.

National Bank of Serbia seeks to limit the spillover effects of import price growth on domestic prices as inflation reached 15% in October.

Industrial production declines 3.5% m/m in October, the first contraction in five months and the first since the pandemic.

Inflation slowed down slightly from the 19.8% recorded a month earlier.