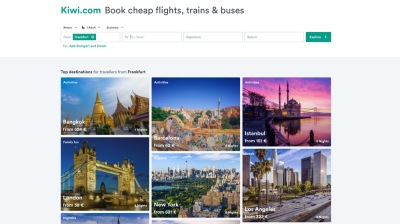 The complicated negotiations are over and Brno-based startup Kiwi.com, formerly known as Skypicker, has been sold to New York based investment fund General Atlantic, General Atlantic said in a statement on June 3.

The terms of the deal weren’t disclosed, with General Atlantic saying merely it made a “strategic investment”, but according to the Czech edition of Forbes, General Atlantic bought a majority stake of nearly 51% in the highly successful Czech startup.

Kiwi’s co-founder and director Oliver Dlouhy remains in his position. “I and a fellow co-founder Jozef Kepesi gave away only a small portion of our shares, we are staying in the company as important stakeholders and our executive role remains unchanged,” Dlouhy said in an interview with Hospodarske Noviny.

“In just six years, Oliver and the Kiwi.com team have profitably built one of the most disruptive and transformative technology platforms in the large and fragmented online travel industry and we look forward to supporting Oliver’s vision of creating a seamless and comprehensive travel experience for value conscious consumers worldwide,” said managing director at General Atlantic Tanzeen Syed.

General Atlantic’s buy into Kiwi.com means that Jiri Hlavenka (who had a 20.2% share), Ondrej Tomek of Impulse Capital (10%), Jaroslav Kokolus of Sugilit Invest (8.5%) and former executive director Lucie Bresova (0.9%) left the company. However, Kiwi’s chief architect Lubos Charcenko continues to hold his share (0.9%) and Touzimsky Airlines keeps almost half of its 21.6% stake (10%).

Kiwi.com started in 2012 as a virtual interlining company of four people and now has more than 2,400 employees worldwide. Formerly it sold only flight tickets from non-cooperating airlines, however, lately it changed its strategy and started offering complex travel agency services to its consumers. Its new owner, General Atlantic, is a growth equity firm founded in 1980. In its portfolio, it already has several representatives of the travel segment, notably Flixbus and Uber.

Estonia and Latvia among first countries to use coronavirus tracing app based on Apple/Google tech
4 days ago
Estonian ride-hailing service Bolt raises €100mn in latest financing round
5 days ago
Romanian firm develops first flat screen recycling line in region
6 days ago
Russia's Yandex.Taxi's IPO still on, as it struggles to stay profitable
13 days ago
Russia's IT segment looks at losses in Q2
13 days ago