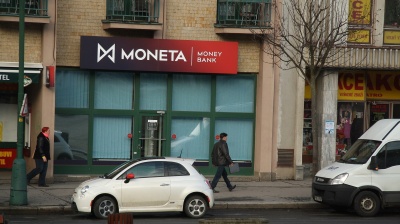 Analysts have criticised the merger plan for benefiting PPF at the expense of small shareholders.
By bne IntelliNews January 26, 2021

Czech bank Moneta Money Bank has received a second public offer from Czech billionaire Petr Kellner´s PPF group to merge with its banking operations to create the third largest bank on the Czech market, the bank announced on January 22. Its board of directors is due to respond by January 29.

"We can confirm that we have actually sent the mentioned tender offer to Moneta Money Bank. However, until the bank responds to our offer, we consider it rude to comment on it publicly," said PPF spokesperson Jitka Tkadlecova to the Czech News Agency.

PPF wants to purchase up to 20% of Moneta from its existing shareholders, with the right to increase it to up to 29%, for CZK80 (€3) per share (19% above the market value) via PPF banka, putting it just below the 30% threshold where it would have to make a public offer to all shareholders.

According to the voluntary public tender offer, the repurchase will be carried out in two phases, where the first part will be unconditional with a cap of 10% of the total nominal value and the second one will be conditional on obtaining regulatory approval by the Czech National Bank. PPF now holds a 0.63% stake in the Moneta Money Bank.

Once it has gained a strong foothold in Moneta, PPF would agree the merger of its Air Bank and Czech and Slovak Home Credit and Benxy with Moneta, giving it a majority in the group.

“If both phases were implemented as proposed, PPF would become the majority shareholder of the entire unified group with a share of 51.8% to 57.2% (depending on the number of shares repurchased in the first phase). Then, in our opinion, there would be an obligation to submit an offer for the mandatory repurchase of shares to all remaining shareholders of Moneta,” commented Patria Finance Analyst Michal Krikava.

Analysts predicted that PPF would wait 12 months after its first offer before merging the banks and being forced to make the mandatory offer, which would mean that it could be at the lower rate of the previous 12-month average stock market price. The billionaire's investment group already appears to have been in negotiations with large shareholders, who are likely to be the main beneficiaries of the initial more generous offer.

Analyst Michal Křikava of Patria told business daily Hospodarske Noviny that the Kč 80/share price is fair but that the second stage of the transaction is not. Analysts said that the valuation of Air Bank for the subsequent share swap is too high.

However, according to Capitalinked.com analyst Radim Dohnal, PPF's second attempt for a public offer has a much better chance of completion than the one presented in autumn 2018.

"PPF very cleverly took advantage of the moment of the Czech Republic is discussing worse expectations of economic recovery, vaccination issues in the Czech Republic and abroad, and banking titles having a roughly two-week correction," said Dohnal.

On January 25,  Moneta Money Bank´s shares rose 10% on the Prague Stock Exchange as a result of PPF´s offer.