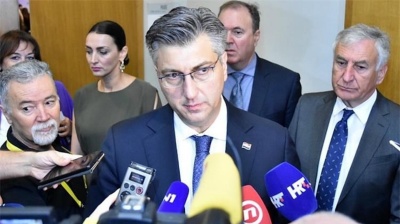 Croatian Prime Minister Andrej Plenkovic has proposed a reshuffle of his government, with six new ministers to be appointed, as revealed to reporters late on July 17 after a meeting with his coalition partners.

The parliament, where the coalition led by Plenkovic’s Croatian Democratic Union (HDZ) and supported by smaller parties and independents has a narrow majority, is expected to approve the reshuffle on July 19. The new cabinet composition has the support of the HDZ, its junior partner the liberal Croatian People's Party (HNS) and their partners, Plenkovic told journalists, state news agency Hina reported.

“The logic behind this government reshuffle is to continue our work on achieving our goals for the benefit of the citizens, without any burden,” Plenkovic told journalists, according to Reuters.

Croatia’s ambassador to Germany Gordan Grlic Radman, a career diplomat, was proposed for the post of Minister of Foreign and European Affairs.

The new Minister of Agriculture will be Marija Vuckovic, former state secretary in the Ministry of Agriculture, who, Plenkovic said, “worked devotedly to meeting all the goals related to agricultural policy, rural development and fisheries”.

The head of the Croatian Institute for Pension Insurance, Josip Alardovic, is Plenkovic’s nominee for the Minister for Labour and the Pension System. He will replace Marko Pavic, who will move to head the Ministry of Regional Development and European Union Funds.

As previously reported, Ivan Malenica, the former dean of Sibenik Polytechnic, has been proposed as the new Minister of Administration. Another former academic, Vesna Bedekovic, will take over the Ministry for Demography, Family, Youth and Social Policy.

Economist Mario Banozic was proposed for the role of new state property minister.

Croatia has made considerable progress over the last five years, but the authorities need to prepare for a future global downturn as well as continue the catch-up with fellow EU member states, said ... more

The European Commission (EC) recommended that Croatia join Schengen after meeting the conditions to join the border-free area, the EC said in a statement on October 22.  Croatia is the EU’s ... more

More than 80% of Croatia’s primary and secondary school teachers went on strike on October 10 after talks on pay with government officials broke down.  Union leaders said 85% of secondary ... more