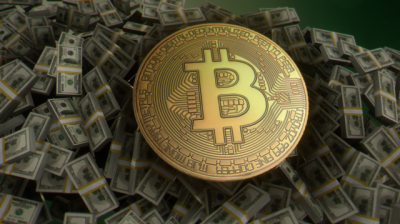 Cryptocurrencies could substitute foreign currencies as a medium of international exchange. / Image: Wiki commons.
By Theo Normanton in Moscow March 2, 2022

After the West imposing severe sanctions on Russia, the country could turn to cryptocurrencies to provide economic stability in place of frozen foreign currency reserves.

Russia’s foreign currency reserves are estimated to stand at around $630bn, but the majority of that money is located outside the country. With the EU, US, UK, Japan and even Switzerland agreeing to freeze Russia’s access to its reserves, they can no longer be used to stabilise the course of the ruble.

Instead, the Central Bank of Russia (CBR) has deployed an arsenal of last-resort mechanisms – from hiking interest rates to 20% to forcing Russian companies to sell their foreign currencies. These two “shock-and-awe” measures had limited success in restraining the rocketing ruble, and it reached 115 to the dollar on Tuesday, March 1, marking the biggest slump since the meltdown of Russia’s financial sector in 1998.

With Russia’s foreign currency reserves out of action, and no other emergency measures seeming to work (no matter how drastic), the Central Bank is getting desperate. Russia is famous for its fiscal conservatism, and the current collapse will be a big blow to those who spent the last eight years trying to shore up the economy.

One avenue which commentators suggest the CBR might explore is cryptocurrency. With vast reserves of hydrocarbons and an educated, tech-literate population, Russia has a strategic advantage in crypto mining.

This practice is already well established in Russia, and involves using high-powered computers to generate new tokens. It is a lucrative business – one bitcoin is worth $44,000 at time of writing. Russia is already the world's third largest bitcoin miner.

With bitcoin and other reliable cryptocurrencies in Central Bank reserves, some have speculated that Russia could overcome its dependence on the dollar and equip itself to weather western sanctions.

However, the CBR pushed for a ban on both the mining and trade of cryptocurrencies in January. The suggestion was that the volatility of these currencies exposed the Russian economy to unnecessary risk.

The resulting conversation was an animated one. Defenders of cryptocurrencies cited Russia’s strategic advantage in their mining, while detractors pointed to their historic fluctuation on the markets relative to a stable currency like the US dollar. Vladimir Putin spoke of the benefits which could come from making Russia a global crypto leader. The Bell has reported that over one trillion rubles could be collected in taxes on the massive crypto pile held by Russians.

FinMin has estimated that Russians already hold around 12 million crypto wallets, with a total capacity equalling around $26.6bn.

Another key advantage of cryptocurrencies is that they are not linked to the global financial system in the same way that foreign currencies are. Whereas a dependence on dollars or euros can be weaponised through the threat of banning Russia’s financial institutions from using these currencies, bitcoin is not regulated by any one country.

Up until now, the only country to be disconnected from global payments messaging system SWIFT was Iran. Using its vast oil reserves, Iran has been able to set up a system allowing it to convert excess fuel into bitcoin using energy-intensive mining operations.

Now that Russian banks are also being cut off from SWIFT, it is conceivable that Russia would follow suit.

However, the CBR will most likely be reluctant to commit to such a move fully. Cryptocurrencies remain subject to big fluctuations, and are not as widely accepted as foreign currencies as a means of transaction (for imports, for example). They are also vulnerable to hacking.

But with Russia’s economy slowly de-coupling from global markets, it has precious few alternatives. The Central Bank is developing a digital ruble, but given the course of the existing ruble, prospects are bleak. Already the world’s third-largest bitcoin miner, we may be about to witness a huge Russian U-turn on cryptocurrencies.