COMMENT: Why replenished ties between Uzbekistan and Turkey suit both Tashkent and Ankara 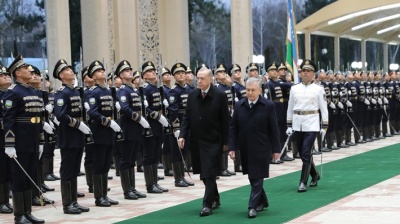 For both Uzbekistan and Turkey, progress in developing a strategic relationship with elements of trade, investment and defence cooperation comes at an opportune time. Amid the ongoing momentous geopolitical developments, Tashkent needs to diversify its political outreach to maintain a multivector foreign policy in order to avoid falling under the sway of a particular regional actor. Ankara, meanwhile, wants relationships that revitalise its pan-Turkic agenda across Eurasia.

On March 29, President of Turkey Recep Tayyip Erdogan paid an official visit to Uzbekistan at the invitation of his counterpart President Shavkat Mirziyoyev. The strategic partnership was top of the agenda. Although relations between Turkey and Uzbekistan remained stalled during the rule of late Uzbek leader Islam Karimov until 2016, his successor Mirziyoyev has very much brought Turkey into the picture under the multivector approach.

For Turkey, the development of ties with Uzbekistan somewhat uneasily took some steps forward just as Ankara was attempting to moderate peace talks between Ukraine and Russia. Nevertheless, Erdogan’s official trip to Tashkent yielded significant results in terms of the elevation of the bilateral ties to strategic partnership level. 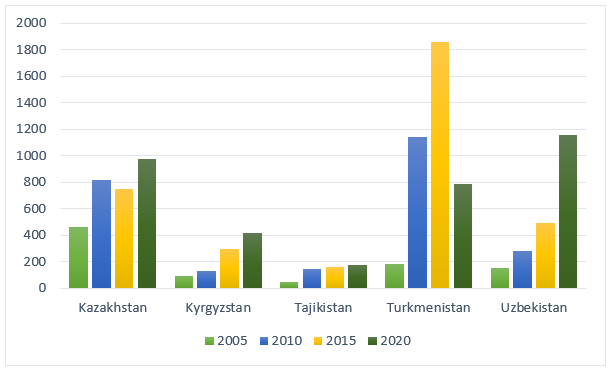 The presidents first inaugurated a 240-MW thermal power plant and a 220-MW piston-gas power plant built by Turkish company Cengiz Enerji. According to Azim Akhmedkhadjaev, the Uzbek First Deputy Minister of Energy, the power plants will contribute greatly to the efficiency and capacity of Uzbekistan’s energy production.

Though historically, Central Asia region has been a geopolitical backyard of Russia, Moscow’s declining influence and resources have allowed Beijing to emerge as a new key economic partner of states including Uzbekistan. Landlocked Uzbekistan is of particular importance to China's central connectivity node, linking through to Afghanistan, Pakistan and the Middle East as it does. Beijing has heavily invested in Uzbekistan, consolidating its focus on infrastructure projects. For example, the much-anticipated China-Kyrgyzstan-Uzbekistan (CKU) railway project, a 4,380-kilometre multimodal railway that aims to connect the Chinese city of Lanzhou to Uzbekistan’s capital, Tashkent, is of critical importance for both countries. Also, China has been mentioned as an important economic partner of Tashkent in the newly adopted strategy titled “Development Strategy of New Uzbekistan for 2022-2026.”

Nevertheless, Chinese financial assistance to Uzbekistan comes at a cost. Like other regional states, Uzbekistan apprehends that all financial loans, technical assistance, technology, and so forth, increase China's leverage over the country. Uzbekistan’s economic difficulties and isolated geographic location make it receptive to Chinese debt. Notwithstanding the growing debts, Chinese loans increase economic activity and facilitate growth. Indeed, Chinese state-owned companies have explicit privileges within Uzbekistan over small local companies, which could further undermine the business climate of the country and destroy its competitiveness.

Moreover, during a period of intense cooperation, Uzbekistan made inroads into the Chinese markets exporting $1.74bn of goods such as mineral fuels, cotton, copper and inorganic chemicals compared to $1.70bn of exports to Russia in 2021. Moving ahead, Russia’s involvement in the Ukraine war will further force Moscow to divert its main resources away from the Central Asian region, which will open a new window of opportunity for newcomers. 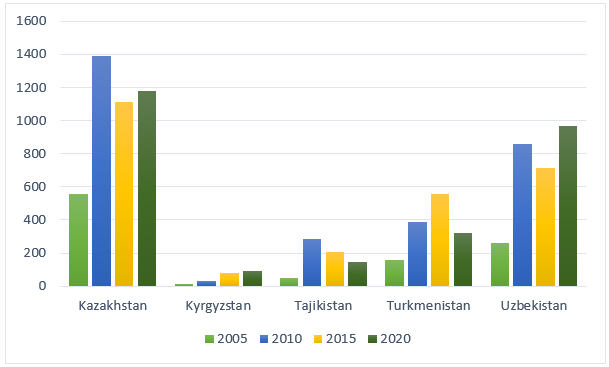 In addition to the current significant trade turnover between Turkey and Uzbekistan that has emerged since the warming of the previously icy relations between the two, Uzbekistan's decision to join the Ankara-led Organisation of Turkic States in 2019 facilitated relations and helped transform the geopolitical architecture of the region. Turkey is seen emerging as Uzbekistan's new strategic economic partner, given the trade turnover growth. In 2019, the volume of Turkey-Uzbekistan bilateral trade reached $2.3bn, while around 1,300 firms in Uzbekistan were operating with Turkish capital in a variety of sectors ranging from textiles, food production and pharmaceuticals to building materials and plastics.

Turkish exports to Uzbekistan were valued at around $1.18bn, with Uzbek exports to Turkey at around $1.01bn in 2020. However, the total trade volume between Uzbekistan and Turkey exceeded $3.6bn, an increase of nearly 72% y/y, with a set one-year target of $5bn for 2022.

Interestingly, Erdogan landed in Tashkent shortly after Uzbekistan signed a new investment agreement with China. Yet it was followed by a series of cooperation agreements with Turkey, including a preferential trade agreement. The pan-Turkic agenda in the Eurasian region was seen as given new legs.

The military angle is a crucial part of the bilateral cooperation between Ankara and Tashkent since Mirziyoyev has been seeking to increase the capabilities of his country’s armed forces given the expansion of militant Islamism activities stemming from Afghanistan. The withdrawal of the US-led international coalition from Afghanistan in 2021 and the emerging threat posed by the Taliban regime and its proxy forces forced Tashkent to seek more intensive military cooperation with militarily-advanced Turkey. As such, in March 2021, the first Uzbek-Turkish joint military drills were conducted in the city of Termez, close to the Afghan border.

The growing military ties between Ankara and Tashkent mean that the latter may soon start importing Turkish-made advanced military technology and acquire the Turkish-made Bayraktar combat drones, like Ukraine, Azerbaijan, Ethiopia and Albania.

The renewed military and economic partnership with Turkey should enable Uzbekistan to preserve its autonomy amid the growing influence of Beijing in Central Asia. Seemingly, Tashkent needs a valuable partner with adequate strength to counter China and Russia's influence. Hence, with its improving and bolder ties with Central Asian nations, Turkey could become a new agenda-setter in the region. Indeed, the moment perfectly suits Ankara's interests, opening new opportunities for it.

A partnership with Turkey proves less complicated for Uzbekistan compared to ties with Western countries and China, given historical and cultural relations. Turkey may serve as a safe "gateway" for Uzbek goods to be delivered to Western markets while playing its role as a counterweight against China and Russia, the latter now struggling with isolation due to the international economic and political sanctions triggered by the war in Ukraine.

Russia’s industrial output resilient in 2022 on war spending
Russian budget deficit soars in January, full year deficit could double to over 6% of GDP
Jury still out on the effectiveness of the oil price cap scheme on Russian exports

"If the EU institutions do not ensure that the progress achieved by Ukraine, Moldova and Georgia [is] fully impartial, they will be doing them a disservice. Their path towards Europeanisation must not be subjectivised or romanticised."

More and more signs point to a new major Russian initiative to take Ukraine in the spring, including a possible attack on Kyiv. How could a major Russian offensive or a Russian victory in Ukraine challenge Europe?

Mercantilism is also replacing globalisation, and the US has a declining interest in European affairs.

CENUSA: Bringing Ukraine, Moldova and Georgia closer to the EU: a multi-speed progress.
2 hours ago
NEMETHY: How the Battle for Ukraine may change Europe
11 hours ago
COMMENT: The new Cold War will be different, and not only because of China
19 hours ago
PANNIER: Uzbeks, Kyrgyz cooperating to level unthinkable 10 years ago
7 days ago
PANNIER: A very Turkmen coup
11 days ago