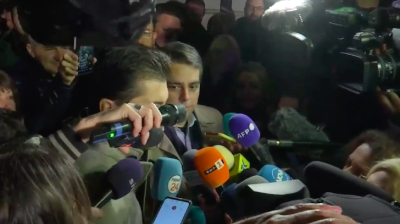 Political newcomer Change Continues and Gerb, which ruled Bulgaria for a decade, are in an extremely close race for first place in the November 14 snap general election, with exit polls indicating either of them might win.

This is Bulgaria’s third general election within a year after the other two votes failed to produce a ruling coalition and a government. Pre-election polls pointed to yet another fragmented parliament this time around, though the leaders of both parties say they will try to form a government.

In the presidential election also held on November 14, President Rumen Radev leads, as expected, but the election will most likely go to a second round.

According to an exit poll from closely International, Change Continues is winning the vote with 25.8%, tightly followed by Gerb with 23.5%. However, three other polling agencies put Gerb in first place; according to Alpha Research, Boyko Borissov’s party is on 24.8% versus 24.1% for Change Continues.

Polls put the Bulgarian Socialist Party (BSP) third with between 13.7% and 14.4% of the vote, followed by the ethnic-Turk Movement for Rights and Freedoms (DPS) with between 9.6% and 10.7%.

Change Continues – the formation of the two most popular former caretaker ministers Kiril Petkov and Assen Vassilev – seems to have taken votes from people who previously backed reformist Democratic Bulgaria, Stand up.BG! We Are Coming! and There Are Such People (ITN).

ITN, which won the previous general election on July 11, came fifth with between 9.1% and 9.9%, while Democratic Bulgaria is sixth with between 7% and 7.8%. Some of the polling agencies see far-right Vazrazhdane party passing the 4% threshold to enter parliament.

The leaders of Change Continues said in their first statement they will start negotiations with other political parties in the coming days and they plan to nominate Petkov for prime minister and Vassilev for finance minister. However, the two leaders said these nominations are not mandatory and are just proposals they will make to the other potential partners.

Vassilev said no new snap election is likely, while Petkov suggested that coalition talks with Democratic Bulgaria will be easy as the two formations have similar priorities.

The formation will focus on reducing corruption and reforming the judiciary, including by the removal of chief prosecutor Ivan Geshev as soon as possible.

Borissov also claimed victory and said he intends to start coalition talks too. He said that DPS could be Gerb’s coalition partner, and suggested that Democratic Bulgaria and Change Continues are also potential partners. However, these two formations have denied any possibility to work with Borissov’s party.

“The potential of the vote for change is preserving and re-distributing. We are in a similar situation as before. Instead of ITN, we have the party Change Continues, which supposedly would compile a government more easily and will have more predictable policy,” political analyst Daniel Smilov said during Dnevnik’s live broadcast.

He added that should Vazrazhdane make it to parliament, the situation will be more difficult.

“The real question is what the BSP will do,” Smilov added.

Meanwhile, as expected the incumbent Radev leads in the presidential election, also held on November 14. Exit polls show him taking between 49% and 51% of the vote. However, as the turnout was low, he will have to face with his runner-up – Gerb-backed Anastas Gerdzhikov – in a second round. Theoretically, if supporters of all other candidates unite against Radev, he might lose the vote. However, most analysts expect he will win a second term.

According to polling agencies, the turnout was around 38%, the lowest this year, despite expectations that more people would go to polling stations. There have been suggestions that the low turnout was a result of the efforts to prevent paid voting.

The election day was marked by a few reports of irregularities and one rather bizarre event of a woman who chewed and swallowed her paper receipt from the machine voting in protest as she said she was unable to cast her ballot properly.