CENTRAL ASIA BLOG: Is the Middle Corridor all it’s cracked up to be? 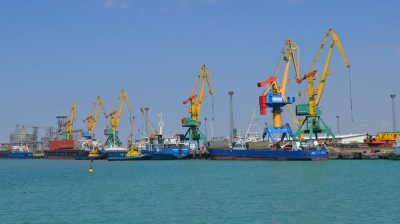 The “Middle Corridor” is all the rage. Industry insiders talk about its exciting potential to transform Central Asia into the essential region for goods transit between China and Europe. It's not hard to see what all the fuss is about. With Russia now a pariah to the West, containerised freight routes that avoid the angry bear to the north are in sore demand. The time to promote, equip and build up the Middle Corridor, officially the Trans-Caspian International Transport Route (TITR) – connecting East Asia to Europe via Kazakhstan, the Caspian Sea, Azerbaijan, Georgia and Turkey – is now, say officials.

Innumerable articles have appeared of late highlighting how, regardless of the outcome of the war in Ukraine, Russia’s moral and material authority as a broker in its Central Asian “backyard” will become just about non-existent. One article, published by National Interest, suggested Europe should shift the dialogue around TITR “from one of bringing Chinese products to European markets to that of connecting Central Asia and the Caucasus to Europe,” which would allow “the European Union to take a clear role in developing new markets for its products and services while providing peace and prosperity along the entire corridor.” 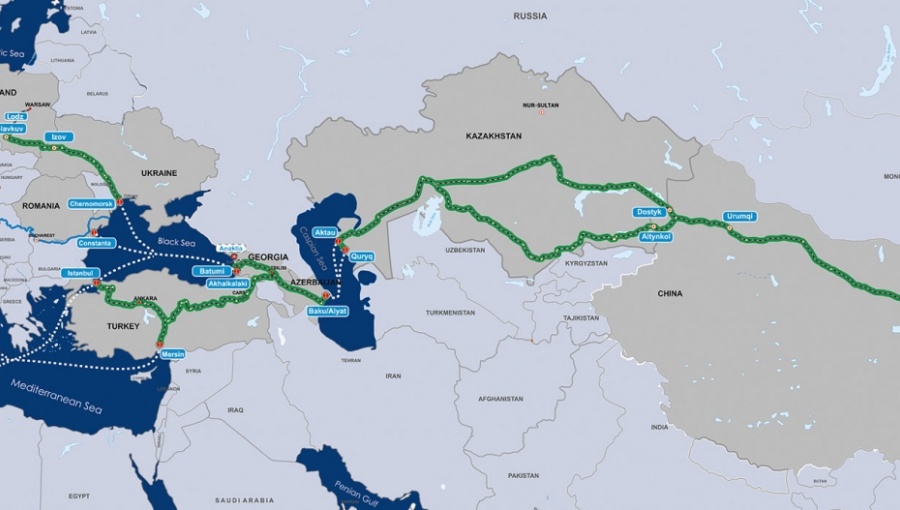 Among Middle Corridor options is the choice in Georgia of Black Sea shipping to Europe or rail haulage to Turkey but these services still have some way to evolve (Credit: Commonspace.eu).

Silk Road Briefing lately reported on recent developments in bilateral relations between China and Turkey. It pointed out the scope for synergy between China’s infrastructure-focused Belt and Road Initiative (BRI) and the Middle Corridor supported by both Turkey and Central Asia.

Its article cited Derya Gocer, head of the regional studies department of Middle East Technical University, as saying that she believed that “despite differences in visions, [Turkey’s] Middle Corridor Initiative and China’s BRI are complementary”.

Gocer suggested that ports and logistics hubs should play a greater role in the BRI infrastructure rollout, an eventuality the Middle Corridor Initiative is aiming to deliver.

The TITR Association said in a statement earlier this year that the volume of goods transported via the route annually was expected to expand sixfold relatively quickly to 3.2mn tonnes amid a sharp rise in demand for alternative transit options.

Yet doubts as to the likely effectiveness of the TITR linger. Could it really entirely replace cargo transit capacities lost by the weakening of (if not the death of) transit via Russia?

Hussein Askary of the BRIX-Sweden Institute, which specialises in analysing BRI routes, wrote in late July that there had been significant exaggeration about the dysfunctional state of China-EU trade via Russian territory. In particular, Askary criticised assessments claiming that the China-EU Rail Express (CEER), also known as “the Northern Route of the New Iron Silk Road”, was being killed off by the consequences of Russia’s invasion of Ukraine, such as the various heavy sanctions imposed on Moscow.

For context, the route passes through Russia and Belarus and had come to be regarded as providing one of the most prominent supply chain arteries between China and the EU, connecting several major industrial and logistics hubs in China with important Western European industrial cities.

Taking aim at Foreign Policy magazine’s analysis denoting a collapse in CEER’s relevance, Askary wrote that “around 50% of the east-bound (from EU to China) transport operations along the CEER (EU-Belarus-Russia-China) and EU-Belarus-Russia-Kazakhstan-China) were temporarily suspended by the rail and logistics operators, because many of their clients decided to move away from Russia and Belarus to other options, mostly back to sea shipping lines”. But he posited a counterpoint, namely that Chinese freight firms had, in fact, continued to use the route for West-bound freight to the EU.

Askary went on to state that some recovery in China-bound transit was observed after an initial mass exodus when the invasion of Ukraine began, noting that most of the aversion to the route by European exporters was a result of high insurance premiums demanded by European insurance firms due to the region’s volatile geopolitical situation. Of course, the war has not spilled over into Belarus and Russia, so has not posed a direct threat to cargo transportation beyond Ukraine.

As noted in this publication's assessment of the situation, however, Paul Stronski, a senior fellow at Carnegie Endowment for International Peace’s Russia and Eurasia Programme, pointed to difficulties for Russia in mid-June when he told the South China Morning Post that a railway line from the Chinese border through Kazakhstan, Russia and Belarus and into the European Union was “heavily subsidised by the Chinese side” and was otherwise dead.

China’s willingness to continue subsidising the route is in question. The atmosphere at the Shanghai Cooperation Organisation (SCO) summit held in September in Samarkand, Uzbekistan indicated that Chinese leader Xi Jinping’s patience with Vladimir Putin over Ukraine might be wearing thin. As such, if the war in Ukraine does not end soon, the Middle Corridor could become an increasingly attractive option to Beijing for the continued fostering of trade with the West.

Stronski also expressed his belief that the China-bound cargo of European suppliers had also been hurt by “reputational risks”, adding that “Chinese producers have grown wary of using the route, given all the same reasons.”

Nevertheless, even assuming this is all now taken as read, a number of difficulties still plague the primary alternative route widely proposed for bypassing Russia.

In late August, former Kyrgyz prime minister Djoomart Otorbayev, in an op-ed for Azerbaijan’s Aze.Media, quoted Asian Development Bank (ADB) as saying that “the main problem with the [Middle] Corridor is that it involves slow and costly ferry legs to cross first the Caspian Sea and then the Black Sea from Georgia to the ports of Romania or Bulgaria, or else using an underdeveloped rail route through Turkey”. The difficulties were previously outlined in a recent report of the Asian Development Bank Institute. 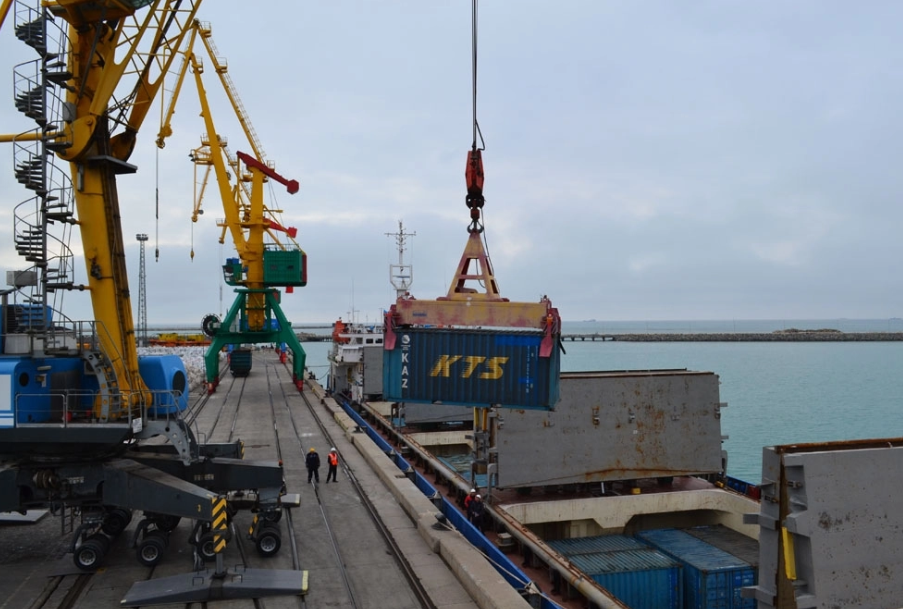 Further challenges were brought up in a written commentary by James Jay Carafano, vice president at the Kathryn and Shelby Cullom Davis Institute, and Silviu Nate, director of the Global Studies Center at Lucian Blaga University of Sibiu, for the Heritage Foundation.

“There is no customs union, joint tariff co-ordination, or transnational digital integration among Middle Corridor nations. Nor is there sufficient infrastructure to accommodate the volume of goods handled by the northern route. For example, current infrastructure can accommodate only about 5 percent of the intercontinental rail trade,” the commentary said.

“Further, the Middle Corridor is a more complicated route. It requires sea transfer hubs for goods to cross the Caspian and the Black Seas. This will doubtless increase costs and lengthen delivery times. But progress is being made,” it added. 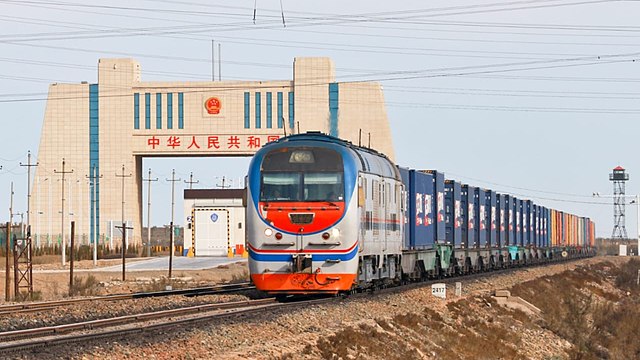 Outlining one positive side to Middle Corridor developments, observers at Geopolitical Intelligence Services (GIS) wrote in late August that despite the aforementioned 5% figure, the Central Asian nations had been investing extensively into developing their travel and transit infrastructure, with Kazakhstan leading the way. Central Asia's biggest economy has in fact invested nearly $35bn over the past 15 years to construct more than 2,000 km of railways, 19,500 km of roads, 15 airports and Caspian Sea port facilities.

GIS also looked at how Kazakhstan announced a $20bn investment package this year for diversifying transit and freight transport routes along with integrating logistic solutions; since the EU accounts for 40% of Kazakhstan’s external trade, developing such routes is a no-brainer for the country.

The one obvious thing remaining on the table is that Kazakhstan and the other Central Asian states must act swiftly while the momentum to restructure trade flows is still there, but as always only time will tell what is in store for the region and the TITR.