Bosnia’s Dodik gets a warm welcome in Moscow 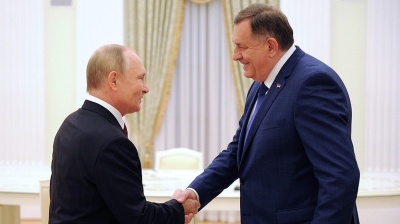 Russian President Vladimir Putin has given his support to the Serb member of Bosnia & Herzegovina’s tripartite presidency, his loyal ally Milorad Dodik, wishing him success in Bosnia’s upcoming elections and saying he hopes to “further develop fruitful and mutually beneficial cooperation”.

While most European leaders have distanced themselves from Russia since the invasion of Ukraine in February, Dodik is on a visit to the Kremlin, hoping to secure Russian funding for energy projects and to get Putin’s support ahead of Bosnia’s October elections.

At the meeting in Moscow, Putin praised Dodik’s loyalty to his regime.

“I want to emphasise once again: we know you as a friend of our country. I am glad to see you and have the opportunity to discuss with you the situation in the region and our bilateral relations,” Putin said.

The meeting took place amid Russian setbacks in Ukraine, where Ukrainian troops successfully liberated the village of Bilohorivka in Luhansk Oblast on September 19, breaking Russia’s total control of the region since July.

It followed the discovery of around 450 bodies in a mass grave in the newly liberated city of Izyum in Ukraine’s Kharkiv region, many of them showing signs of torture. This is believed to be the worst mass killing of civilians in Europe since the 1995 Srebrenica massacre in Bosnia.

Prior to his visit to the Kremlin, Dodik said that Russian war in Ukraine was “justified”, demonstrating his loyalty to Putin.

Commenting on the situation in Bosnia, Dodik said he is grateful that the Russian president is defending the Dayton peace accord, thus protecting the Serb-dominated Republika Srpska.

Russia has repeatedly clashed with other members of the international community over Bosnian issues, and tried to block the appointment of the new high representative to the country.

“I would like to convey to you greetings from my people, from Republika Srpska, gratitude for the attention and support that you provide us at the multilateral level, primarily in the UN Security Council, for understanding the specific circumstances in which we work, your commitment to preserving the Dayton Agreement … On the other hand, we also have those who want to be a means of changing the rules, changing the international system, and now it was very important that we have friends who understand our specific situation,” Dodik said.

The pro-Russian Bosnian Serb leader will again run as a member of the tripartite state-level presidency — despite seeking the secession of Republika Srpska — while his ruling SNSD party hopes to record yet another easy victory in the entity in October.

Dodik also mentioned the decision of Bosnia’s Football Association to agree to a friendly match with Russia, which sparked a backlash in the country by Bosnians who want the country to take a tougher stance against Russia.

However, was no information from either side on whether Dodik has succeeded in achieving any of his goals in terms of energy investments.

Ahead of the meeting Dodik talked of the need to secure gas for Republika Srpska and for investments into several energy sectors.

“Regarding specific projects, we would like to receive additional confirmation that the focus and priority shall be on all economic activities related to the refinery for the processing of oil and fuel oil, the construction of gas pipelines, and gas power plants. Of course, we shall wait for the moment, and as soon as it appears, we shall start working on those projects,” Dodik said on September 19 as quoted by N1.

He added that Republika Srpska is not a big consumer of gas like Serbia, but that the issue of gas supply is still very important.

“We want to build a gas pipeline to Banja Luka [the administrative centre of Republika Srpska], to build power plants that would use gas. In that case, Republika Srpska would become a major gas consumer. We base those plans on Russia's potential and our cooperation with Gazprom,” he said.