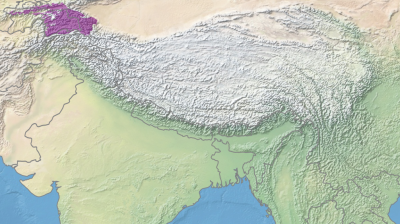 The Pamir alpine desert and tundra ecoregion (purple), which takes in parts of Kyrgyzstan, Tajikistan, China and Afghanistan, covers the western end of the Himalayan Qinhai-Tibet Plateau. / Terpsichores, cc-by-3.0.
By Aida Kadyrzhanova in Almaty November 12, 2022

Ten million people, inhabiting a plateau including parts of eastern Tajikistan and southern Kyrgyzstan that is a dominant part of the “Third Pole of the Earth”, are threatened by climate change-driven permafrost thawing that is occurring at a rate twice the world average, according to research published by the Communications Earth & Environment journal.

The thawing of the permafrost (permanently frozen soil) is said to be undermining the stability of local infrastructure across the Himalayan Qinhai-Tibet Plateau, a 970,000-square mile (2.5mn-square kilometre) area around five times the size of mainland France that stretches from Western China to Pakistan, also taking in parts of Nepal and India.

The researchers calculated that the Qinhai-Tibet Plateau permafrost area is criss-crossed by more than 9,389 kilometres of roads, 580 km of railways and 2,631 km of power lines, while 1,064,590 square metres of buildings are also located in the zone of concern. 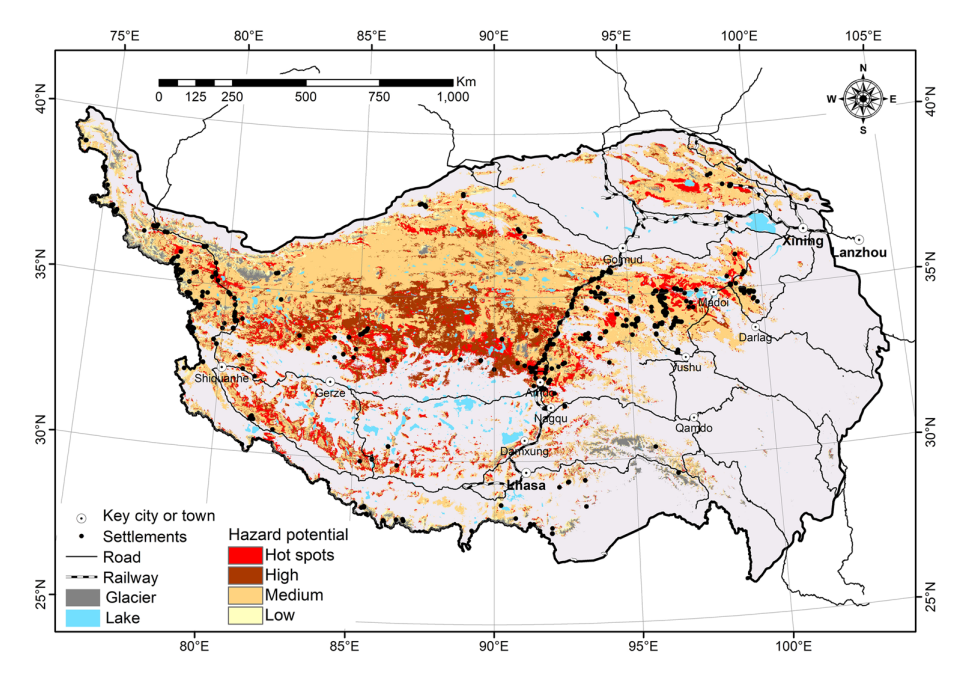 By 2050, the researchers say, permafrost thaw will pose a threat to 21% of the buildings, 39% of the railways and 38% of the roads within the endangered area. These proportions may nearly double over the decades following 2050. The demand for infrastructure replacement and repair work costing tens of billions of dollars will become increasingly pressing.

"We have a lot of permafrost where it is cold: close to the poles and in mountainous regions. When permafrost thaws, the ground becomes unstable. It is much easier for that soil to move. A lot of places experience subsidence, opening up roads, affecting airports, train tracks, oil pipelines, or even buildings," Mathieu Morlighem, an earth sciences professor at Dartmouth University, was reported as saying by Newsweek in relation to the research.

“At local scales, permafrost thaw can lead to unstable or shifting ground that can damage building foundations, roads, pipelines and other infrastructure,” concurred John S. Kimball, a systems ecologist at the University of Montana.

The research was published ahead of the release of new United Nations Educational, Scientific and Cultural Organization (UNESCO) data highlighting the accelerated melting of glaciers in World Heritage sites, with glaciers in a third of sites set to disappear by 2050. It would still be possible to save the other two thirds, if the rise in global temperatures does not exceed 1.5°C compared to the pre-industrial period, UNESCO said.

The research made findings such as how glaciers in the Western Tien-Shan mountainous region (Kazakhstan, Kyrgyzstan and Uzbekistan) have shrunk by 27% since 2000. 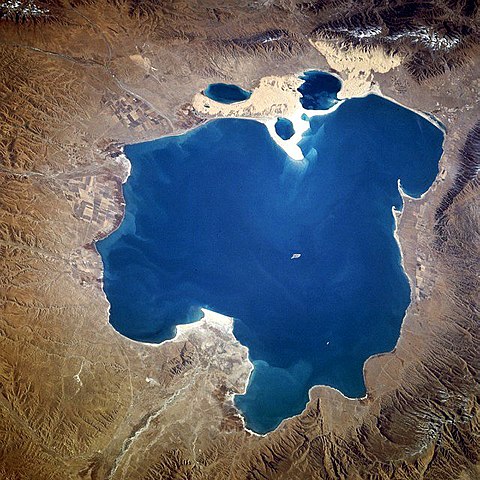 Permafrost melting is a factor in the drying up of lakes. Qinhai Lake, the largest lake in China, seen from space, is situated on the Himalayan Qinhai-Tibet Plateau (Credit: Nasa, public domain).

Permafrost melting is also a factor in the widespread drying up of lakes and other water bodies. Lakes can begin to drain quickly in the final phases of permafrost melt, causing the surface to dry. Both satellite and ground-based measurements show that the Qinghai-Tibet Plateau is part of a widespread surface drying trend registered in the northern hemisphere permafrost zone.

The three longest rivers in Asia are fed by meltwater from the three freshwater alpine lakes located within the Third Pole, which also serve as a key water supply for nearly 20% of the world's population.

A fragile semi-arid grassland ecology is kept alive by the moisture provided via mountain lakes and streams. The plateau's lakes, rivers and other water sources will start to dry up as permafrost and glaciers continue to melt.

"The drier landscape and atmosphere degrades the grassland productivity and contributes to soil erosion that may lead to desertification. Desertification may promote less rainfall and snowfall, causing even further reductions in water supplies," Kimball was further quoted as saying.

Scientists say that permafrost thawing in one location even worsens thaw in other geographies of the Earth by feeding back into climate change.

"A major concern is that permafrost has become unstable and is thawing nearly everywhere in response to the rapidly warming climate, which is rising at more than three times the global average warming rate across high northern latitudes," says Kimball.

"The exact amount depends on whether society reduces human emission or not, with the lower values corresponding to a world where overall warming is kept below 2 degrees C,” he added.