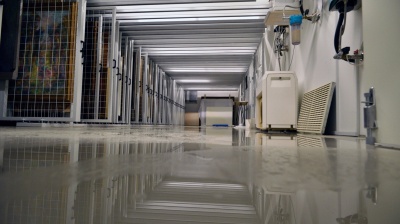 The Slovenian capital Ljubljana was flooded following extremely heavy rains on September 29, which caused widespread water damage to buildings and disruptions to traffic. The water surged inside homes, hospitals and other buildings, while the Museum of Modern Art was severely damaged. According to the authorities this was one of the heaviest rainfalls in over 200 years.

The number of extreme weather events in Slovenia is already increasing, and will grow further, along with higher temperatures and more precipitation, by the end of the century, the Slovenian Environment Agency projects.

More than 50 litres of rain per sqm fell on parts of northeast Slovenia in a very short period of time in late afternoon on September 29, 24ur reported. Later, in the evening, even heavier rainfall was registered in central Slovenia, not seen in the country’s 160-year history of meteorological measurements.

According to Slovenia’s Environmental Agency, 96 litres of rain fell in Ljubljana between 9 pm and 10 pm, and a total of 122 litres of rain per square metre during the evening.

Prior to that, the worst downpour in Slovenian capital was measured on August 11, 1951, when 62 litres of rain per sqm fell in one hour, and the maximum five-hour rainfall was recorded on October 22, 2014, namely 113 litres per sqm.

Slovenia’s administration for civil protection reported that the Ljubljana regional centre received more than 2,700 calls for help from citizens.

More than 500 buildings, roads, carparks and underpasses were flooded and several vehicles got stuck in the high water. Ljubljana firefighters said that they made over 360 interventions.

Water in the Moderna galerija / Museum of Modern Art (MG+MSUM), which was renovated between 2007 and 2009, has invaded some of the storage vaults, and the damage is expected to be substantial, the museum said on its Facebook page. However, it added that an exhibition of Picasso graphics had been moved in time to prevent damage.

"Immediately after yesterday’s event attended by senior officials, the staff had to safely rescue Picasso’s works. The modern gallery will be temporarily closed. The damage will be measured in hundreds of thousands of euros," Moderna gallery’s representative for public relations Mateja Dimnik was cited by Delo.

“It was catastrophic, the water even flowed from the lights,” she described the situation.

Average temperatures are expected to rise by up to 6 degrees Celsius in Slovenia by the end of the century due to climate change caused by greenhouse gas emissions, according to projections from the Slovenian Environment Agency.

The average temperature is projected to rise by 1.3 degrees by the end of century under the most optimistic scenario and by 6 degrees under the most pessimistic.

A separate report by Zurich-based Crowther Lab projected that Ljubljana will see the greatest increase in the maximum temperature of its warmest month by 2050 of any of the urban areas worldwide included in its study. Cities across Southeast Europe will see strong increases in average temperatures, the 2018 study said.

Sibur, one of the world’s largest petrochemical companies, has set more ambitious ESG targets over the next five years, including in recycling, low-carbon products and energy use.

Russia is revving up to launch a four-decade-long, RUB89 trillion ($1.2 trillion) investment campaign to reduce carbon emissions by 60% before 2050 from 2019 levels.

Further blow for Bosnian Federation's plans to update coal-fired power plant with Chinese loan after US supplier GE pulled out in June.