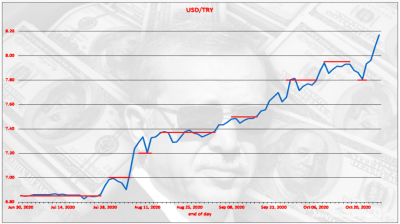 Turkey will not move to impose stricter capital controls and that should be entirely clear, the country’s finance minister, Berat Albayrak, said on October 27 during a telecall with representatives of around 100 companies.

Ahead of giving his capital controls assurance, Albayrak as per usual talked total garbage.

Perhaps the only inference that can be drawn from the call is that the focus of markets has shifted to what could be done with capital controls, with the Turkish central bank’s reserves now in a perilous position following the failed fight to burn up dollars to defend the sinking Turkish lira (TRY). Meanwhile, with his underlings battling to find solutions that can prevent Turkey plunging into a full-on balance of payments crisis—and more smoke was seen pouring out of their nerve centre on October 26 as the lira descended at some speed to its latest all-time low of 8.1971, having breached the 8.0 threshold just the day before—President Recep Tayyip Erdogan—he who would never dream of going cap in hand to the IMF for a bailout because (can’t you see!?) his economic management is in reality a stonking success—works overtime with his fireworks and dynamite show, tossing curdling invective at Western countries to distract the home audience from the lira’s collapse and provide the mainstream media and pundits with some specious reasons to explain it.

Bloomberg reported on October 27 that Turkey’s state banks sold $1bn across the first two days of this week to support the lira. There is some confusion here as various news outlets and pundits tend to suggest that the government lenders can only be said to have intervened when Bloomberg has reported that it is so. That is not the case. The palace makes sure of maintaining a “native and national FX team” at the state banks who are constantly active from the local market opening on Sunday night through to the close on Friday night.

Bloomberg simply reports an intervention when there is clear action seen in Turkish lira. But it does not require a report from the news agency to recognise the crude horizontal barriers that run across the chart for the USD/TRY pair.

The central bank on October 27 released raw, and unfortunately lagged, data on its FX liquidity position as of end-September.

Haluk Burumcekci of Burumcekci Consulting may on October 28 release in his daily bulletin his calculations of how much in reserves the national lender threw to the wind in September.

There are those who by now wince and grimace when they see the pain Turkey’s currency is enduring—after it crossed the 8 barrier, Aykan Erdemir, Turkey Program senior director at the Foundation for Defense of Democracies (FDD), noted that when Erdogan assumed office on March 14, 2003, the exchange rate was 1.64 lira to the dollar—but what is the true “pain threshold” that would trigger an emergency rate hike? The betting has opened.

The depreciation in the year to date stands at towards 30% so perhaps you might throw in a figure of 35%, or plump for 8.50 or 9.00 to the dollar, but the truth is that there is nobody who can be sure what Erdogan will do in the face of this currency emergency as he does not rely on any known criteria. He’s on a perfectly random walk. Perhaps his pal stateside, the individual called Trump, who's wrapped himself in glory fighting the coronavirus, has some idea.

A final word of caution here. If you are going in for a straight comparison between now and the August 2018 lira crash then you must not be au fait with what has happened with the central bank reserves, the lira trading board and Turkey in general since 27 months ago. Time to look it up.

BEYOND THE BOSPORUS: Turkey shakes off reality in the pursuit of single-digit inflation

BEYOND THE BOSPORUS: Erdogan swallows humble pie and bitter pill as market gets its rate hike but watch for sleights of hand

ISTANBUL BLOG: Turkey’s official figures (and moustaches) are a little too neat

BEYOND THE BOSPORUS: Turkey shakes off reality in the pursuit of single-digit inflation
BEYOND THE BOSPORUS: Erdogan swallows humble pie and bitter pill as market gets its rate hike but watch for sleights of hand
ISTANBUL BLOG: Turkey’s official figures (and moustaches) are a little too neat