Belarus to stand with Russia if war breaks out in Ukraine 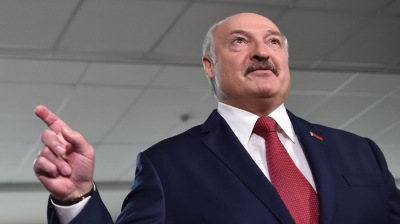 Belarus' President Alexander Lukashenko says he has Russia's back if it invades Ukraine or is attacked by Nato. / wiki
By bne IntelliNews December 6, 2021

Belarus' President Alexander Lukashenko made it clear that Minsk’s loyalties lie with Moscow and he would back Russia in the event of a Russian invasion of Ukraine, in a lengthy interview with RIA Novosti.

“I will do everything so that Ukraine becomes ours. It’s our Ukraine, the people there are ours. This isn’t emotion, this is my firm conviction,” Lukashenko said. “If Russia is faced with aggression from Ukraine, we will be closely linked – economically, legally and politically we will be with Russia.” The Belarusian leader added that Belarus would be willing to host Russian nuclear weapons on its territory, reports FPRI BMB Ukraine.

Belarus’ support would be essential if Russia invaded Ukraine, as one of Russia’s possible military strategies would be to attack Ukraine across its northern border to cut the eastern front off from reinforcements from Kyiv and the reserves in the west of the country, but to do that Russian troops would have to cross Belarus, which commands Ukraine’s northern border.

Lukashenko also revealed plans to visit Crimea with Vladimir Putin and in effect recognise the occupied peninsula as Russian territory – something Minsk has tiptoed around since the annexation in 2014. Belarus’ comments brings the total number of countries that recognise Russia’s occupation of the peninsula to three. “Crimea is de facto Russian Crimea. After the referendum, Crimea also became Russian de jure,” Lukashenko claimed.

“If the president [of Belarus] has already arrived there [in Crimea] with the president of Russia, what other recognition can there be?! It’s redundant,” the Belarusian head of state added.

Addressing Lukashenko’s comments, Ukraine's Foreign Minister stated that Kyiv will evaluate the Belarusian leader’s actions, rather than in his words. “If Belarus does recognise Crimea, it will be an irreparable blow to Ukrainian-Belarusian relations,” Dmytro Kuleba said, emphasising that Ukraine would respond “at full scale.”

Separately Ukraine’s Defence Minister Oleksii Reznikov made some interesting comments in an article in the Atlantic Council, saying that Ukraine’s low-key response to the mounting Russian pressure was because “we are used to it” after seven years of conflict.

Reznikov went on to say that Ukraine would “make the ground burn” under Russia’s military feet if it did invade and that Russia would be unable to hold the territory without paying a huge cost in lives.

“The human cost for Ukraine would be catastrophic, but Ukrainians would not mourn alone. Russia would also suffer massive losses. Images of coffins returning to Russia from the front lines in Ukraine would spread like a virus across social media and would soon prove too much for even the Kremlin censors to contain,” Reznikov wrote.

Because of this cost the Defence Minister believes an attack is unlikely, as public support for a large invasion of Ukraine is not that strong.

“While I have emphasised Russia’s readiness to raise the stakes, it is also vital to note that the Putin regime is nothing if not pragmatic. They are highly skilled at assessing risks. While an escalation is currently possible, it is still avoidable,” Reznikov said.

Reznikov also added that another aspect to consider in a potential large-scale conflict with Russia is that it would bring Ukraine’s agricultural production to a halt; as the biggest exporter of grain in the world that would lead to a major crisis on the international grain markets that would only further galvanise the rest of the world’s opposition to Russian aggression.

Belarus doesn't seem to care about any of this, as Lukashenko remains fully focused on fighting back against western sanctions and the opposition’s attempts to force him out of office.

A day before Lukashenko's interview with Ria Novosti on November 29, the Belarusian Defence Ministry announced plans to hold joint military drills with Russia along the country’s southern border near Ukraine, in the “medium term.”

“Neighbouring countries are actively militarising, and this cannot but worry us, which is why we are forced to plan response measures,” Belarusian Defence Minister Viktor Khrenin asserted.

Amid these tensions, Belarus accused a Ukrainian military helicopter of violating its airspace on December 4, as Lukashenko seeks to hype tensions with the EU, which he has been portraying as an aggressor poised to attack Belarus for more than a year now. A spokesman for Ukraine’s border guard service refuted the allegation, saying that aviation was being used to monitor the border, but there were no airspace violations, reports Reuters. Nevertheless, the Belarusian Defence Ministry handed a note of protest to Ukraine's military attaché on December 5.

Lukashenko has been using the “enemy at the gate” narrative repeatedly over the last year to try to rally popular support behind his regime, without much success.

LONG READ: Is Russia’s economy headed for 'economic oblivion', as a report from Yale says?

COMMENT: Emerging European tightening cycle coming to an end
LONG READ: Is Russia’s economy headed for 'economic oblivion', as a report from Yale says?
Western capitals wonder what kind of sanctions deal Erdogan may have cooked up with Putin

Croatian president says Western sanctions aren’t working
50 minutes ago
End of Vienna talks means US, Iran political approvals now needed to revive nuclear deal
9 hours ago
Western capitals wonder what kind of sanctions deal Erdogan may have cooked up with Putin
1 day ago
Leaders of Serbia and Kosovo to meet as they pull back from brink of conflict
1 day ago
The Guardian confirms aspects of the controversial Amnesty International report on Ukraine’s alleged war crimes
1 day ago