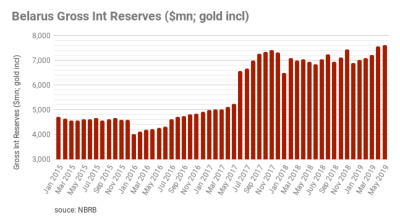 The result was attributed to the purchase of foreign currency by the central bank on the Belarusian Currency Stock Exchange; the receipt of funds in foreign exchange to the budget, including export duties on oil and oil products; as well as proceeds from the sale of government bonds denominated in foreign currency.

According to the nation's monetary policy guidelines for 2019, the volume of international reserve assets as of January 1, 2020, should be at least $7.1bn, the NBB added.

Minsk will use the money to repay previous Russian loans. The two governments are discussing procedures needed for signing the loan agreement, Siluanov added.

The minister also underlined that the Russia-led Eurasian Fund for Stabilisation and Development (EFSD) is considering the allocation of the seventh $200mn tranche to Minsk. In October 2018, the EFSD allocated the sixth $200mn support tranche to cash-strapped Belarus from the lender's $2bn loan agreed with Minsk in 2016.

According to the Belarusian finance ministry, the country’s budget revenue losses from the tax manoeuvre in 2019 alone were estimated at BYN600mn ($300mn), and that the losses might total $2bn by the end of 2024.

On December 8, a spokesperson with Belarusian President Alexander Lukashenko said in a televised interview that Minsk already lost $3.6bn due to Russia's cut of energy subsidies to Belarus. Due to Moscow's 'tax manoeuvre' Belarus will lose extra $11bn within the next four years, the spokesperson added.

In November 2018, Yermolovich told journalists that Minsk should repay around $5.4bn of the state debt in 2019-2020. "Some of the $5.4bn will be refinanced. In the to-be-refinanced part $2bn will be raised as untied credit resources, which we are going to get abroad by floating the relevant bonds for a broad spectrum of investors," he said.

Belarusian government sees $2bn of withdrawals, issues $580mn worth of bonds in 2020

Confidence remains low compared to 2019, but current volume of production orders and expectations for coming months are more favourable than in November.

Romania's industrial production index edged down by 0.6% m/m in November after six months of recovery.

Strongest drop in demand was in the service sector, but partly offset by higher demand for occupations related to the pandemic and post-earthquake reconstruction.

The net international reserves of Ukraine as of January 1 amounted to $18.1bn, which is 19% more than at the beginning of December 2020 ($15.2bn), Head of the Council of the National Bank of Ukraine (NBU) Bohdan Danylyshyn said.

Epidemiological situation was among the worst in the euro area in the fourth quarter and required a tightening of restrictive measures, which led to another severe drop in economic activity, the Bank of Slovenia said.