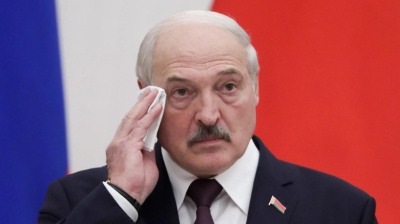 Lukashenko appears to be feeling the heat / www.gzeromedia.com
By bne IntelliNews May 24, 2022

Already from the start of Russia’s invasion of Ukraine, Belarus was hesitant to take an active role in the invasion. Belarusian strongman Alexander Lukashenko has instead been content with sabre-rattling from the sidelines to please the Kremlin, while also desperately trying to not be equated to Putin or seen as Putin’s vassal.

However, Lukashenko’s attempt to save face via mixed messages of peace and increased threats of war with the West and Ukraine haven’t got him very far, and many Belarusians are more than eager to take the fight to Lukashenko.

Belarus Defence Ministry reported on Monday, 23 May that it had moved on to the next stage of the inspections of the Belarusian army’s response forces.

As a part of this stage “weapons, military hardware and special hardware will be taken out of long-term storage,” and the inspection will allow for their evaluation.

On May 4, Belarus announced a “surprise inspection” of its armed forces, increasing fears that it might start to take a more active role in Russia’s invasion of Ukraine.

However, Ukraine’s presidential advisor Oleksiy Arestovych was quick to downplay the significance of this inspection, saying that Ukraine saw no signs of Belarus preparing to attack.

Ukraine has noticed increased reconnaissance from the Belarusian side of the border and assesses that the threat of missile and air strikes from Belarusian territory still remains, according to a situation report released by Ukraine’s Armed Forces’ General Staff on 23 May.

The State Secretary of Belarus’ Security Council Aleksandr Volfovich made a statement yesterday where he in turn accused Ukraine of increasing reconnaissance along the Belarus-Ukraine border.

Volfovich appeared shocked at Ukraine laying down minefields and blockading border crossings, which is being done to prevent future ground assaults from Belarusian territory.

During his meeting with Putin on Monday, Lukashenko warned that Nato (with Poland in the front line) would “dismember” Ukraine by grabbing parts of western Ukraine, adding that Ukraine would have to ask Belarus and Russia to prevent this.

However, as with his previous similar statement accusing Britain of staging the Bucha massacre, he provided no evidence for his claims.

Yesterday, Belarusian state media reported that a letter from Lukashenko had been handed over to UN Secretary-General Antonio Guterres on May 18.

In the letter, Lukashenko opposed the international community’s labelling of Belarus as an aggressor state in Russia’s war and instead claimed that Belarus was committed to “prompt peace”. He also called for a new “post-conflict” world order to be built, “of increasing reconnaissance along the Belarus-Ukraine border.”

As bne IntelliNews reported on last week, Lukashenko’s calls for peace and his claims of the Belarusian regime’s innocence in the invasion are working together with his continued war rhetoric in order to serve his interests both towards the West, and towards Russia.

Towards the West, it’s important for Lukashenko to portray himself as a guarantor of peace and to work against the Ukrainian and Western statements that Belarus is a co-aggressor to Russia.

However, these mixed signals are unlikely to have the desired effect, as the rift between it and the West continues to widen. Only last week, Lukashenko signed an amendment to expand the use of the death penalty in order to silence opposition activists.

Many Belarusians have answered Zelenskiy’s call to foreign nationals to come to Ukraine’s aide, and Belarusians continue to travel to Ukraine to join the fight against Russia’s invasion.

The Kalinousky Battalion comprised of Belarusian volunteers was established already in early March. Recently, the battalion announced that it would become a regiment, splitting off into two separate battalion units.

The exiled Belarusian opposition has espoused support for a Russian defeat in the war, something they believe will lead to the downfall of Lukashenko’s regime.

Many of the volunteers in the Kalinousky Battalion have personal experiences of the regime’s brutality and see the battalion as their chance to make a change both for Belarus and against Russian post-Soviet imperialist revanchism. In the words of a member of the battalion, “Power from Lukashenko can only be taken by force.”

Thus despite the Lukashenko regime’s brutal crackdown on the opposition at home, the will to fight against his regime still lives on among ordinary Belarusians. The ones most eager to oppose him find a way out of the country and volunteer for Ukraine’s fight against Putin, which in the future may also become a fight against Lukashenko.

The worsening economic data coming out of the US and yet another coronavirus lockdown in China will tip the world into a global recession, the Institute of International Finance (IIF) said in a note on July 1.

NEO: Rising in the East, Setting in the West: Russia strengthens trade with Global East

As global supply chains undergo a momentous shift and Western markets decouple from Russia, the latter is looking to new markets and old partners for trade and investment.

Global inflation refuses to be tamed and with price increases in the US hitting 8.6% in May, its highest level in 40 years, the Fed is expected to continue tightening monetary policy by hiking rates that will suck liquidity out of emerging markets.

The economics of herding in Mongolia

More and more young people may be leaving the physically demanding herding life behind to seek their fortunes in the cities, but it remains big business.

EXPLAINER: how a price cap on Russian oil might work

Europe is scrambling to find alternatives to Russian crude oil, natural gas and coal. But the fact remains that despite recent cuts in the amount that the EU buys from Russia, Moscow’s revenues from hydrocarbon exports still surged 40% this year.

US and Chinese slowdown will tip the world into recession, says IIF
1 day ago
NEO: Rising in the East, Setting in the West: Russia strengthens trade with Global East
3 days ago
Stagflation fears continue to rise
3 days ago
The economics of herding in Mongolia
4 days ago
EXPLAINER: how a price cap on Russian oil might work
5 days ago