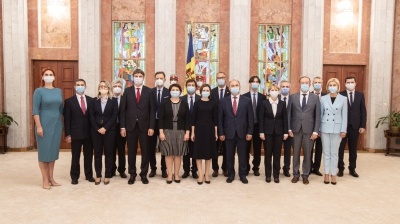 Prime Minister Natalia Gavrilita’s government is backed by a robust majority in parliament. / presedinte.md
By Iulian Ernst in Bucharest August 9, 2021

Moldova’s new government, headed by Prime Minister Natalia Gavrilita, received the endorsement from the parliament on August 6, and ministers were sworn in by President Maia Sandu The government formed by the pro-EU Party of Action and Solidarity (PAS) secured the votes of 63 MPs out of the 101 seats.

The new government, backed by a robust single-party majority in parliament, puts an end to the series of political crises that followed the major bank frauds in 2014-2015 that seriously undermined the credibility of the pro-EU parties in power at that time.

"I signed the decree on the appointment of the government led by Natalia Gavrilita, based on the vote of confidence granted today by the parliament, and the members of the executive took the oath. I congratulated the new ministers on this extremely important moment — the investment of an honest government, supported by a parliamentary majority of honest people, is what hundreds of thousands of citizens of the Republic of Moldova wanted, who on July 11 went to the polls hoping to change the situation in the country for the better. It is the culmination of the effort of tens of thousands of people, who for years have fought against corrupt regimes and injustice,” Sandu said at the swearing in ceremony.

The team of 16 ministers announced by Gavrilita earlier in the week includes a significant number of academics, as well as experts with previous experience in international organisations such as the World Bank and the United Nations and several leading members of the PAS.

Gavrilita has stressed that as many as possible of the leaders of public institutions will be replaced, starting with state secretaries and the heads of agencies under the direct supervision of the government. The laws may be amended if needed, in order to secure credible leaders of all the public institutions as well, she said.

While the expertise and credibility of each of the 16 minister candidates in their fields is robust, only a few of them have been involved so far in the public administration system, mainly as MPs or members of Sandu’s short-lived government in 2019.

One of the most critical appointments is Sergiu Litvinenco, one of the few members of the government with political experience and a founding member of the PAS.

He will coordinate the reforms in the critical sector of justice. The relevant chapter in the ruling strategy document published by Gavrilita is particularly ambitious and it visibly incorporates the experience Romania gained in the fight against corruption.

Among the other key appointments are Minister of Economy Anatol Gaibu and Minister of Finance Dumitru Budianschi, both economists from the local Expert-Grup think tank that focuses on public policy. The ruling strategy aims at boosting annual foreign direct investments (FDI) to 4% of GDP through major improvements in the regulatory framework.

Minister of Foreign Affairs Nicu Popescu is a researcher and associate professor at the Institute of Political Science (Sciences Po) in Paris, as well as a director of the Enlarged Europe programme at the European Council on External Relations (ECFR), Paris office.

Focus on the judiciary

The new Moldovan government will have to find its way between big public expectations and its limited resources, after its economy was battered by the coronacrisis.

This is may make Gavrilita’s strategy look less impressive, but the focus on the reforms in the judiciary system is likely to consolidate its credibility despite the economic progress that cannot be achieved instantly.

On August 7, Gavrilita met the European Union’s ambassador in Chisinau Peter Michalko to discuss the update of the Association Agreement agenda. Michalko assured that the €50mn final tranche of the Macrofinancial Agreement will be released quickly, most likely by the end of September.

The strategy announced by Gavrilita’s government is rather cautious, in slight contrast to the very high expectations of the citizens, according to Veaceslav Ioniță, economic policy expert of the local think-tank Viitorul.

"Only through an ambitious program of investments in public infrastructure, attracting foreign investment and streamlining the justice, the government will be able to secure a decent life for citizens," said Ionita, who assessed seven priorities of the government led by Gavrilita.

Former socialist prime minister Aureliu Ciocoi said he sees Gavrilita’s strategy as “leftist” because of its focus on social measures. To some extent this comment may be justified, though the PAS has said less about its economic strategy than about the planned reforms in the judiciary.