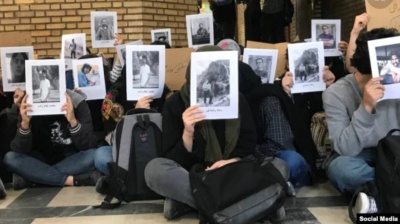 University students in Iran have been instrumental in keeping up the protests. / social media
By bne IntelIiNews December 4, 2022

Anti-regime protesters in Iran on December 4 called for a three-day economic strike starting on December 5 and set to culminate with a rally in Tehran's Azadi (Freedom) Square on December 7—the same day President Ebrahim Raisi is set to address students in the capital to mark Student Day.

The call came as the unrest continued into a third month. It also came amid conflicting interpretations of remarks made in Qom on December 3 by Iran's prosecutor general Mohammad Jafar Montazeri as to whether or not the country’s morality police have been shut down. It was the mid-September death of Iranian Kurdish woman Mahsa Amini, 22, while in the custody of morality police in Tehran, that sparked the first protests. Though many foreign media outlets concluded from Montazeri’s comments that the police unit was no longer functioning, it actually appeared that the most that could be established from his somewhat vague words was an observation on how the morality police and judiciary were and always have been separate entities. Clarification from the interior ministry, which is in charge of overseeing the morality police, was awaited, though state media, including including Arabic-language Al-Alam, part of Islamic Republic of Iran Broadcasting (IRIB), were strongly pushing back on the suggestion that the morality police were no longer operational.

Amini was detained for alleged offences against Iran’s Islamic dress code. As Al Jazeera reported, even if Iran scrapped the morality police, the law that imposes the dress code on women remains in effect and can still be enforced. There has been no indication it will be terminated, though there are reports that Iran is reviewing the mandatory hijab, or headscarf, law for potential adjustments.

Hundreds of people have been killed in the protests. Though officials claim the total is around 200, human rights groups calculate a figure closer to 500. The UN, meanwhile, has estimated more than 14,000 people have been arrested during the unrest.

Iranian officials have blamed foes including the US, Israel and Saudi Arabia for fomenting the protests, but have offered no evidence of this.

In comments reported at the weekend by the Guardian, senior European diplomats said they believed Iran’s leadership has “lost contact” with the Iranian people and has thus reached an irreversible turning point from which they could not recover. One diplomat was cited as saying: “The situation is really quite simple. The Islamic Republic – the regime – after 43 years has finally lost contact with their people and that is what this is really about. This is different from anything that’s gone before in the previous 43 years.

“They are having a dialogue with themselves but the main population finds the offers of reform as largely an irrelevance.”

In another development, a prominent Sunni cleric said on December 2 that it was wrong to charge protesters with capital offences as renewed demonstrations shook Iran's restive southeast.

Also on December 2, the family of Elnaz Rekabi, the Iranian rock-climbing champion who was engulfed by controversy after competing in the Asian climbing championships in Seoul without a head scarf, said that police officers had violently demolished their family villa.

The previous day, several Iranian student associations accused authorities of deliberate "serial poisoning" after reports that a large number of students from at least four Iranian universities across the country fell ill. The Union Councils of Iranian students reported that several schools experienced outbreaks of poisoning after eating at cafeterias. At Kharazmi University in Karaj, near Tehran, the number of those apparently poisoned was so high that the university's clinic could not handle all of the patients.