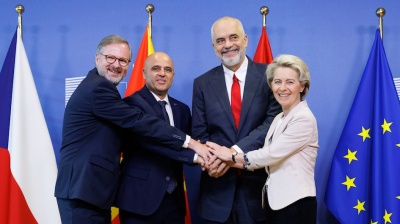 Albania and North Macedonia launched EU accession talks on July 19 after waiting for two years for Bulgaria to lift the veto on the start of talks with Skopje that also blocked Albania, which was coupled in the process.

The doors for North Macedonia’s EU negotiations were opened after the country accepted the French proposal aimed at ending the deadlock on July 16. That led to the lifting of the Bulgarian veto, imposed over language and history issues. The proposal was accepted by the parliament in Skopje was despite protests and rejection of the proposal by the opposition, which see it harmful to the country’s national interests.

“What a historic moment. Today, Albania and North Macedonia are opening the accession negotiations to the European Union, and I am so glad to be here with you,” President of the European Commission Ursula von der Leyen said.

“They are the most deserving of today’s event. They did not surrender to any challenge, to mountains of difficult concessions and compromises, in order to fulfil their dream of belonging to the European family,” Kovacevski said.

Across the Atlantic, US President Joe Biden welcomed the start of accession talks with the two Western Balkan countries given the current geopolitical context.

“In a moment when Russia has shattered peace in Europe, it is more important than ever to support the aspiration for a Europe whole, free and at peace. A democratic, secure and prosperous Western Balkans remains essential to this vision,” Biden said according to a White House statement.

North Macedonia, previously known as Macedonia, has been waiting for this moment for 17 years, after it got candidate status in 2005. The country’s progress was blocked first due to the Greek veto, which was removed with the 2018 Prespa name deal, and later Bulgaria threw up obstacles linked with history and language issues.

One of the biggest stumbling blocks in the relations between Sofia and Skopje is that Bulgaria does not recognise the Macedonian language and also wants changes to history textbooks to reflect its viewpoint of history.

On the other hand, North Macedonia's authorities said that the language and identity issues are not negotiable.

Von der Layen addressed Kovacevski on this topic: “Dimitar, you can count on my support to ensure that the agreement is translated into the Macedonian language, no footnote, no asterisk, on an equal footing with all 24 EU languages.”

She underlined that North Macedonia will very soon negotiate with the EU on the deployment of the EU border force Frontex to North Macedonia which is expected to strengthen cooperation on migration. So far the signing of the deal was prevented due to the Bulgarian refusal to accept the document being signed in the Macedonian language.

No longer a hostage

Albania became an EU candidate country considerably later than North Macedonia, in 2014. Yet until the recent breakthrough there was growing frustration in Tirana too that progress was blocked, especially as it was due to a dispute between two other countries that did not involve Albania.

Prime Minister Edi Rama has previously described Albania as a “hostage” to the dispute between Sofia and Skopje, and had talked of seeking to decouple from North Macedonia if it failed to move forward in June.

Speaking at the launch of accession talks, Rama called EU accession a “matter of life and death” for the Albanian nation.

He also commented on the importance of EU accession as a unifying force in the Western Balkans. “I want to point out that it will not be only two but four out of six Balkan countries [in accession talks]. In an area like the Balkans, it means fewer ghosts from history in our political life,” he said.

Also commenting on the progress made within Albania on its journey towards the start of accession talks, Rama highlighted the impact of the justice reforms made over the last few years as one of the conditions for progressing — and the subject of lengthy political battles within Albania.

“If a few years ago, you could have asked someone about a politician behind bars, they would have laughed at you. Today no one has immunity. Equality before justice is possible and achievable,” Rama said.

Right after the first intergovernmental conference (IGC), the screening of the EU acquis started in Albania and North Macedonia as the first step in the process.

“The screening will enable Albania and North Macedonia to get familiar with the rights and obligations of our Union,” the president of the Commission said.

Von der Leyen stated that both countries can expect benefits as they advance in the negotiations.

“There will be a boost in investment. There will be improved trade links. There will be closer collaboration in key areas, like, for example, energy or transport. You will maximise the use and the impact of EU funding. This means new jobs, new business opportunities,” she said.

Despite the breakthrough, the opening of EU accession chapters is expected only after the second IGC, which will be held after North Macedonia adds ethnic Bulgarians to the constitution, one of Bulgaria’s conditions for lifting its veto. This is an unprecedented addition to EU enlargement policy.