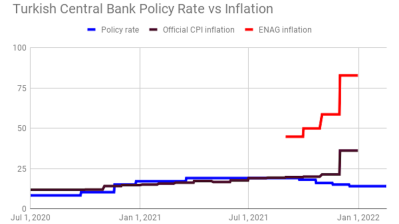 ENAG, an Istanbul-based academic research group that produces inflation data that starkly contradict the Turkish government’s official figures, is facing a court case that could close it down and bar its members from issuing public statements.

The last set of data issued by ENAG (aka the Inflation Research Group, or ENAGrup) was particularly striking. While national statistical institute TUIK (aka TurkStat) contended that end-2021 inflation in Turkey amounted to 36.08%, the group’s economists calculated that it was actually 82.81%.

Surveys have shown that a big majority of Turks do not believe the official inflation data and, with Turkey’s economic crisis—often blamed on economic mismanagement of the Erdogan administration—intensifying in recent months, ENAG’s figures are not going down well with top officials. Another consideration is that Turkey has gone into election mode. Parliamentary and presidential polls must be held at some point by June 2023.

ENAG’s director Veysel Ulusoy has been hit with court papers, filed by TUIK, claiming that the group has been attacking the public persona of TUIK and demanding it cease its activities.

Ulusoy, also head of applied sciences at Istanbul’s Yeditepe University, has assumed legal responsibility for the ENAG’s actions. He told Al-Monitor in an interview on January 27 that he does not anticipate facing a serious fine or jail time, but that “anything can happen.”

“The public was so interested in having this kind of [inflation[ data rather than Turkstat’s false signals,” Ulusoy was quoted as saying, adding: “We knew that something was wrong and the inflation basket was misleading the public. Public support was the main thing that took ENAGrup to the next stage.”

The Erdogan regime is regularly under fire for attempting to stamp out dissent. It is accused of stripping away the independence of institutions including the judiciary and the central bank. TUIK, meanwhile, has been accused of failing to stay independent of the presidency.

“Turkstat is underestimating the true inflation rate, that’s obvious,” Ulusoy was also reported as saying, while attacking its methodology as “totally false.”

TUIK does meet an internationally recognised standard by calculating consumer price inflation with a basket of goods and services from 12 groups, such as food and non-alcoholic beverages, transport and communication. But ENAG argues its basket is too narrow.

“We rely on the approach of a large number in statistics so you can measure inflation accurately,” he said. “For example, there are about 30 different varieties of milk and we take them all into account but Turkstat only takes a couple of varieties,” Ulusoy also told Al-Monitor, adding that reporting artificially low inflation would hinder Turkey’s bid for an economic recovery.

Also on January 27, Turkish central bank governor Sahap Kavcioglu said that the regulator was now forecasting that Turkey’s annual consumer price inflation would finish the year at 23.2%. Its previous forecast was for 11.8%.