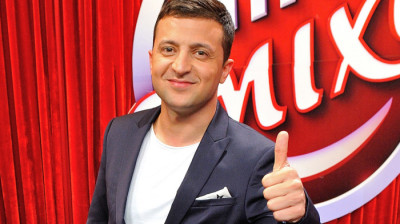 The approval ratings of Ukrainian President Volodymyr Zelenskiy have begun to fall. The tidal wave of public support that swept him and his party Servant of the People (SOTP) into power this year has started to subside. After a blitz of legislative reforms and a PR coup from a first big prisoner swap with Russia, the new president’s administration has started to get bogged down in the complexity of many of the changes he is trying to bring about.

The approval ratings of Zelenskiy, Prime Minister Oleksiy Honcharuk and parliamentary speaker Dmytro Razumkov all fell in October according to a poll conducted by the Kyiv International Institute of Sociology (KIIS).

Two thirds of respondents (66%) in a telephone survey of 1,200 people said that they had a positive reaction to Zelenskiy, down from 73% in September, a rating that made him more popular than Russian President Vladimir Putin. Honcharuk saw his approval rating fall by 10% from 17%, while Razumkov’s rating fell to 27% from 33%.

Since the initial wave of crowd-pleasing measures, like the nixing of parliamentary immunity that was passed on the government’s first day of work, Zelenskiy has run aground on several issues.

First he was embarrassed by US President Donald Trump’s decision to release the transcript of a phone call between the two presidents that showed him in something of a bad light.

More recently he failed to condemn the attacks on former central bank governor Valeriya Gontareva, including on her person, her family and an arson attack that burnt down her home.

Zelenskiy has also failed to curb attempts by his friend and mentor, oligarch Ihor Kolomoisky, to denationalise his Privatbank. The situation has caused the International Monetary Fund (IMF) to suspend talks on a new Extended Fund Facility (EFF) for Ukraine until the fate of the bank is made clear.

Finally the president made his first really controversial decision by signing off on the so-called Steinmeier Formula in an agreement with Russia that will grant a special status to the Donbas region ahead of elections there. Many Ukrainians see this as a capitulation to Russian demands and Kyiv has already seen several demonstrations.

Agreeing to the Steinmeier formula was a precondition the Kremlin set for holding the first Normandy Four meeting (Ukraine, Russia, France and Germany), but now that the deal is done, Moscow seems to be dragging its heels and a date for the meeting has yet to be set. Originally it was hoped that the meeting would be held this week, but now the government in Kyiv is talking about a delay to November. The longer the meeting is delayed, the more pressure Zelenskiy will be under as his mission to bring peace to the Donbas loses momentum.

“The sliding popularity of Zelenskiy and The People’s Servant party was inevitable. Those ratings, and sentiments about the country’s overall future, will inevitably decline much further. The turning point will be Zelenskiy’s ability to fulfil the Minsk Accords or his failure to do so. Those favoring the ‘peace at any cost’ scenario will reject him swiftly and drift towards the Putin-aligned politicians. If he fails on Minsk and extends that warfare, he won’t gain much with the pro-Western electorate, which already distrusts him,” Zenon Zawada of Concorde Capital said in a note.

About a quarter of respondents approved of the recent protests against Zelenskiy’s plans for the Donbas, while 41% disapproved.

Separately, the survey found 70% of respondents believed that the issue of selling agricultural land should be decided through an all-Ukrainian referendum. That marked an increase of 6 percentage points from September. If the referendum on the sale of land took place this coming Sunday, 55% of Ukrainians would vote against it and 21% would vote for selling. The rest were undecided or declined to answer. Of those who would vote, a formidable 72% would vote against.