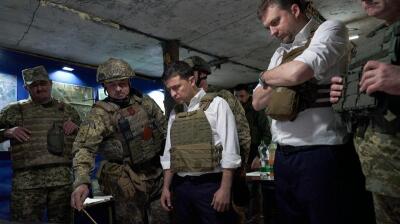 The risk of a full-blown war with Russia “has not increased”, Ukrainian President Volodymyr Zelenskiy to stop bank runs and panic buying as tensions soar / wiki
By bne IntelliNews January 21, 2022

Ukrainian President Volodymyr Zelenskiy played down war fears, calling on the people to stop the runs on banks and food stockpiling, saying no war is imminent in a video released on January 20.

The risk of a full-blown war with Russia “has not increased,” and Ukrainians “must stop running to the banks to withdraw cash, and do not need to stock up on food,” Zelenskiy said as fears of war are fanned by a series of statements by the US.

“The only reason to panic now is, if after eight years of war, we finally succumb to it,” he said. “Withdrawing money from our accounts, taking everything off the shelves, sharing fakes and scare stories with all our friends and acquaintances. All our citizens need to take a breather,” Zelenskiy added.

Zelenskiy told citizens that no new war is expected and that the war has already been raging for seven years following the start of the Russian-backed insurgency in the eastern regions of Donbas. Zelenskiy continued, saying there is no sign of the military situation worsening anytime soon. The real attack, he said, is not on Ukrainian land, but on its people’s “nerves.”

“What is the news, actually? Hasn’t this been a reality for eight years now? Didn’t the invasion start in 2014?” he asked. “These risks have existed for more than one day, and they have not become bigger.”

Tensions have been rising since the US intelligence services briefed the US press at the end of October that Russia was “massing forces” on Ukraine’s border and that an invasion was “possible.”

As bne IntelliNews has reported, the Ukrainian military has been calm about the possibility of an attack and said there were no Russian troops actually on the border; most of the some 100,000 Russian troops redeployed are stationed in Russian military bases hundreds of kilometres from the border.

However, tensions have risen further in recent days after Russia began sending troops to Belarus, where unscheduled joint military exercises will be held in February.

The populations in Russia and Ukraine are reportedly largely dismissive of the prospective of the imminent outbreak of war, which they believe is unlikely.

“It strikes me of note (not that this has any bearing or reflection on Putin's actual decision making) that there's very little sense in Moscow of people having any idea or interest in fact that their country may be days away from launching a devastating invasion of a neighbour,” the New Yorker’s Moscow correspondent Joshua Yaffe tweeted.

The same sense of calm is reported from Kyiv.

“I speak on a daily basis with an employee who lives in Odesa. I can confirm this, he is totally cool and doesn't think anything will happen. He says all his friends have the same attitude,” Chang Frick, a journalist for the Swedish newspaper Nyheteridag, reported in a tweet.

Almost all the claims of an imminent invasion are coming from US sources at the moment. The Kremlin has repeatedly denied that it has any intension of invading Ukraine, which as bne IntelliNews has reported, remains highly unlikely due to the huge political, economic and military costs that a full invasion of Ukraine would carry.

Nevertheless, Russia continues to threaten military action with troop movements which are designed to maintain the pressure on the US as the ongoing Nato and security negotiations launched following an eight-point list of demands issued by the Russian Foreign Ministry in December.

Those talks continue with a key meeting between Blinken and Russian Foreign Minister Sergei Lavrov in Geneva on January 21, possibly the last round of meetings between Russia and the US before the White House gives its definitive written reply to Russia’s demands that will mark the end of the first round of diplomacy in the current crisis.

According to Zelenskiy, the reports of war are being used as a tactic to weaken Ukraine and attempt to force it into concessions. However, despite playing down the threat of war, he reassured his compatriots that the country is “constantly strengthening its defence capabilities” while striving for a “diplomatic solution.”

White House Press Secretary Jen Psaki said the same day that the US believes that a Russian attack could be around the corner.

“Our view is this is an extremely dangerous situation. We’re now at a stage where Russia could at any point launch an attack in Ukraine,” she said. "It is the choice of President Putin and the Russians to make whether they are going to suffer severe economic consequences or not.”

HESS: West wins the default battle, but the economic war must go on

NEMETHY: Is the US Fed playing with the wrong levers?

Tug of war emerging over what role Iran (and its oil) should play in new world order
HESS: West wins the default battle, but the economic war must go on
NEMETHY: Is the US Fed playing with the wrong levers?