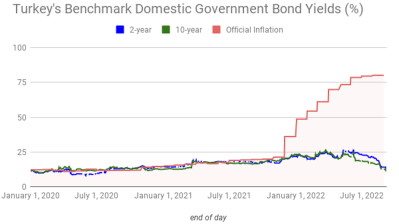 Heavy government intervention in the Turkish economy continues to create some niche market anomalies. The latest is seen in the yields on the government’s USD-denominated eurobonds and Turkish lira (TRY)-denominated domestic bonds.

The reason for this is government repression exerted on local banks that is designed to make the lenders buy domestic government papers via ongoing macroprudential measures and non-capital controls.

On September 2, business daily Dunya reported that the government’s lira-ization strategy was again weighing on the banking industry. Almost every day, with regulatory amendment after amendment, the banks are inculcated with the need to reduce their FX deposits.

Turkish banks are currently obliged to pay a 3% annual commission on their required reserves held at the central bank if the share of their lira deposits stands at below 50% of total deposits.

Since 2018, what critics of the Erdogan administration might describe as the courage of ignorance has been generating difficulties for the Turkish economy. Many anomalies have sprung from the political authority since then.

When it comes to the latest interest rate comedy, those who are not too far from the economics can recall the infamous impossible trinity. Without introducing strict capital controls, pressing simultaneously on both the exchange rate and the interest rates causes detonations.

So far, the Turkish government has managed the situation by introducing more and more non-capital controls. It is not possible to estimate the exact timing of the explosion ahead.

Since September 2, the USD/TRY has been testing the 18.30-level. Turkey’s five-year credit default swaps (CDS), meanwhile, remain above the 700-level.

On September 5, the Turkish Statistical Institute (TUIK, or TurkStat) said that Turkey’s official consumer price index (CPI) inflation amounted to 80.21% y/y in August, following on from the 79.6% announced for July.

On July 28, the central bank increased its end-2022 annual inflation forecast to 60% from the 43% it predicted three months ago. On September 22, at its next monetary policy committee (MPC) meeting, the central bank is expected to cut its policy rate by 100bp to 12%.