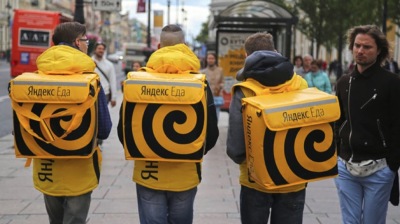 The Russian tech giant Yandex is taking on Russia’s supermarket chains by offering super-fast delivery service that promises to get groceries to your door in under 15 minutes.

Russia’s internet giant and the most valuable tech company in Europe expects the service will revolutionise the entire food retail segment and disrupt the whole sector.

Home-delivered groceries has been a feature of Russian shopping for years but rather than taking days to deliver Yandex has adapted its existing restaurant-delivery service, Yandex.Eats, relying heavily on bicycle delivery from locations close to customers.

Another element of Yandex' business model is using cheaper warehouse facilities that are inside the city centres, since they don't need to serve customers directly. As a result, less attractive facilities located away from street fronts and sometimes even in the basements, are still suitable with minor refurbishing and additions of freezer rooms for fish, meat, produce and ice cream.

So far, the service has only been launched in Moscow where Yandex runs a network of warehouses with an area of about 150 square meters each, or roughly, the size of a small convenience store, each serving a designated area of about a mile in radius. That facilitates fast delivery, making Yandex stand out among major competitors, such as Perekrestok and Utkonos that offer same day or next day delivery.

For instance, the Perekrestok supermarket chain, which is also active in the grocery delivery business, relies on truck delivery from huge distribution centres of between 4,000 and 18,000 sq. meters that are just outside the city centre.

"We saw that retailers themselves are too slow to deliver, while delivery startups that work with third-party stores don’t have real-time access to their assortment and often have to replace goods in the order," Maxim Firsov, head of Yandex' division in charge of the company's grocery delivery service, told Bloomberg. "Therefore, we focused on developing our own mini-warehouses with super-fast delivery."

He added that the company doesn't expect the grocery delivery business to turn in a profit overnight, as Yandex is currently mostly focused on expansion. Still, according to Firsov, since the service was launched last summer, some of the warehouses have already shown "improving unit economics."

Yandex's strategy is to gradually build a market share by selling consumers on the concept of a "digital convenience store," a one-stop shopping place where they would order what they would normally buy at a supermarket, getting it delivered straight to their door.

The concept of fast groceries delivery is relatively new for Russia where most people are still used to grocery shopping at brick and mortar stores. Elsewhere, however, this retail concept is picking up quickly thanks to services such as Turkey's Getir, incidentally, backed by Yandex CEO Arkady Volozh, and the United States' GoPuff. Amazon's Prime Now offers two-hour delivery, compared to which Yandex.Lavka's 15 minutes sounds ultra-fast.

Initially, Yandex sourced groceries from the retailer Metro but later moved to direct contracts with manufacturers and distributors. In late 2019, Yandex.Lavka ran 50 warehouses, and, by the end of 2020, this number is expected to quadruple.

Yandex says that an average order ranges from RUB600 ($9.4) to RUB1,000 ($15.7), and the service doesn't charge anything for delivery. Still, the service reserves the right to reject too small orders during peak hours.

The most popular products ordered from Yandex' grocery delivery service are water, bananas, lemons, eggs and milk, although most of these items are more expensive than those offered by competitor Perekrestok.

The order process works as follows: a customer makes an order, and, when it arrives, a warehouse employee sees it on their smartphone and collects the ordered items within a few minutes. Then, a courier then delivers the order on a bicycle, which normally takes up to 10 minutes, making the total 15-minute delivery time realistic.

While still in the process of establishing a strong presence in Moscow's groceries delivery market, Yandex.Lavka already plans to launch in St Petersburg in the first quarter of 2020. However, it may face serious competition in that market.