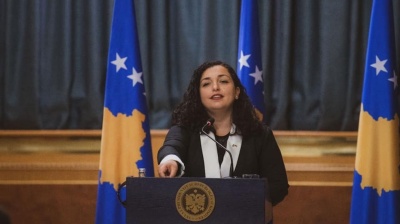 Kosovo’s President Vjosa Osmani said she agreed to provide temporary shelter for Afghan refugees "without any hesitation or any condition".
By bne IntelliNews August 16, 2021

Three countries in the Western Balkans — Albania, Kosovo and North Macedonia — have agreed to a US request to temporarily host Afghan refugees waiting for US visas, amid the chaos after Taliban forces entered the capital Kabul.

Kosovo’s President Vjosa Osmani confirmed on August 15 that the country will provide temporary shelter for Afghan refugees waiting for US visas. “Without any hesitation or any condition, I gave my consent for such a humanitarian operation,” Osmani said in a Facebook post.

Kabul fell to Taliban forces on August 15 with almost no fighting, completing the Islamic fundamentalists' capture of Afghanistan in just six weeks since the US pulled out. On August 14, Reuters reported that the US offered economic and political concessions to Kosovo if it takes several thousand Afghans to protect them from Taliban reprisals.

Osmani added that all Afghan citizens will have to pass a full US security assessment, because they will only stay in Kosovo temporarily until US immigration visa documentation is settled.

“The Kosovo government, immediately after the request and the institutional discussion of the agreement, formed a working group that deals with organisational issues with our American partners,” Osmani said.

Officials from Albania and North Macedonia also confirmed on August 15 that the two countries are ready to serve as transit countries for a certain number of Afghan political immigrants, whose final destination is the US.

Albanian Prime Minister Edi Rama was the first to confirm on August 15 that the US government had asked Albania to assess whether it can serve as a transit country for Afghan political immigrants.

"I do not know if the Americans also asked Kosovo to shelter Afghans, but I wish that if yes, the government of Kosovo should responds positively," Rama said, adding that he was one of those who raised concerns during the Nato summit, about the lives of the Afghan collaborators of the Alliance's member states after its withdrawal from Afghanistan.

North Macedonia’s PM Zoran Zaev also said on August 15 that the country is ready to help the refugees from Afghanistan and had informed the US accordingly.

"Afghanistan is facing a possible humanitarian catastrophe and the government have informed our strategic partners, the US, that we are available to assist in accordance with our capabilities,” Zaev said.

North Macedonia's government said in a later statement it will accept 450 citizens from Afghanistan by the end of the week. Most of them are expected to be employees and family members of humanitarian, human rights and other organisations and journalists that have been working to maintain peace in Afghanistan for the past 20 years.

The quick response from the three aspiring EU members comes as the fall of Kabul and the desperate attempts by hundreds of Afghans to flee the country reopened the thorny debate over migration within the European Union. While some leaders of EU nations and EU officials called for urgent help for Afghans whose lives are believed to be in danger under Taliban rule, other politicians raised concerns about another migration crisis in Europe. Human rights groups, among them Amnesty International, called on Brussels to do more.

Slovenian Prime Minister Janez Jansa has described the chaos in Afghanistan and the handover of modern weapons to the Taliban as "the greatest defeat for Nato in history". In a tweet he said that Slovenia shared responsibility for that as a member of the alliance.

The migrant crisis five years ago, when hundreds of thousands of refugees and migrants travelled via the Western Balkans to Central Europe, strained relations between EU governments and those in some of the aspiring member states. The then government in Skopje in particular complained that the country was bearing the brunt of protecting the EU's borders while its continued to be denied membership of the bloc.

The leader of North Macedonia's opposition VMRO-DPMNE party, Hristijan Mickoski, reacted to the authorities’ commitment to accept refugees from Afghanistan saying that richer countries not North Macedonia should provide solidarity in this case. He also put in question the government’s ability to shelter refugees.

He wrote on Facebook: "PM Zoran Zaev is not able to provide care and protection for our citizens, nor to do it for citizens of third countries.

“[North] Macedonia is one of the poorest countries in Europe, and in such a situation, it is good to see an example of solidarity from the richer countries than Macedonia, by showing true values and accepting refugees from Afghanistan, not by tapping us on shoulder…” Mickoski added.

By contrast, in Kosovo opposition parties supported the authorities' decision to provide shelter for Afghans.

On August 12, the US announced it would send 1,000 personal to Qatar to accelerate the process of providing Special Immigrant Visas (SIV) for Afghans who worked for US government, including interpreters, as Taliban tightened their grip on Afghanistan.

So far, about 1,200 Afghans have been evacuated to the US, but that number is expected  to rise to 3,500 in the coming weeks under Operation Allies Refuge. It is estimated that the total number of evacuees under the SIV programme will range between 50,000 and 80,000 when family members are included, Reuters reported.