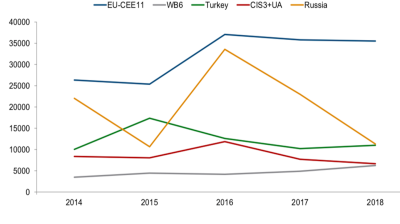 The Western Balkans saw an increase in foreign direct investment (FDI) in the last year, according to data from the Vienna Institute for International Economic Studies (wiiw), that was in contrast to the trends of declining FDI both globally and in the wider Central, Southeast and Eastern Europe (CESEE) region.

Inflows into the CESEE region as a whole declined in 2018, falling to €70.5bn from €81.6bn the previous year. However, as wiiw points out, the decline across the 23 country region was mainly due to the slump in FDI into Russia, which dropped from €23.0bn to €11.3bn, while inflows across the rest of the region were either flat or increased. 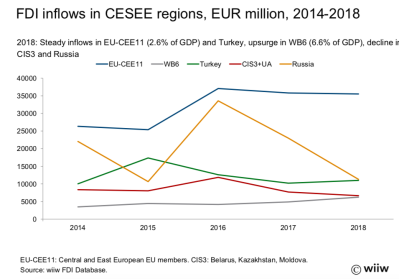 FDI inflows into the six aspiring EU members of the Western Balkans, remaining the smallest in the region, rose from €4.9bn to €6.2bn between 2017 and 2018. This 28% y/y increase was due in particular to rising investor interest in Serbia and North Macedonia, a report from wiiw said.

In a June 6 webinar, wiiw economists talked of the “catching up factor” as the Western Balkan economies remain behind those of Central as well as Western Europe both in terms of overall economy size and FDI. States in the region are also seeing an upturn in FDI as they approach EU accession, a similar process to that seen in CEE economies and the EU member states of Southeast Europe back in the early 2000s.

“Serbia is mentioned with Montenegro as one of two countries that at least in theory could join the EU by 2025,” said Mario Holzner, executive director of wiiw, adding, however, that “no one really believes that”.

Serbia also benefits from its geographic position, bordering EU members Bulgaria, Croatia, Hungary and Romania. “The closer you are to big investors the better off you are. Serbia is really on the border of the EU, and jumping that border for businesses is not that big a problem especially when the infrastructure is there,” said Gábor Hunya, senior economist at wiiw, during the webinar. The northern Vojvodina region in particular has seen a series of FDI investments recently.

Meanwhile, North Macedonia has long been attractive to car components and electronics manufacturers, and the changing of the country’s name under a landmark agreement with Greece has opened the way for its entry to Nato and the start of EU accession negotiations. 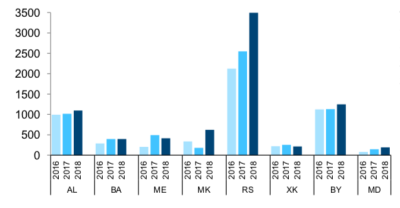 On the other hand, investments in the region are vulnerable to political instability. North Macedonia is a textbook case. It was already attractive to investors before the ‘name dispute’ with Greece that blocked its accession to the EU and Nato was solved, but “then came the political crisis and that was a big blow to FDI. It’s not always easy to say in advance how politics would have an effect [on the economy], but in Macedonia it was very precise. Economic growth came to a standstill, FDI halved,” said Hunya.

Since the political crisis ended, FDI and economic growth have both revived, and there are hopes of a further boost following the name change.

In Serbia, while it is seen as one of the closest of the accession candidates to EU membership, there has been “political aggravation within the country more recently, with demonstrations and the government going into certain directions which might actually hinder the country from joining soon,” the economist commented.

The increase in FDI in the Western Balkans comes in the context of a global decline in FDI that is expected to worsen as international trade wars continue.

This is in contrast to the situation before the international economic crisis of the late 2000s, when FDI was a driving force in international growth. “Except for 2015 when there were some major international takeovers, there has been quite a downward trend in FDI, which has been negative for last three years,” said Hunya.

“Global FDI flows declined in 2018, reflecting faltering economic growth and policies in the US, China and to some extent in Russia to discourage outward FDI,” says the wiiw report.

"In the US, a significant cut to the corporate tax rate, and temporary incentives to repatriate accumulated overseas earnings, prompted American parent firms to withdraw funds from foreign affiliates. In Europe, Ireland and Switzerland in particular experienced strong disinvestments (negative FDI inflows) as a result of these repatriations.”

In this environment, FDI trends are hard to predict, though wiiw anticipates “lower inflows in 2019 throughout CESEE, on account of declining global investment appetite and weaker business sentiment.” 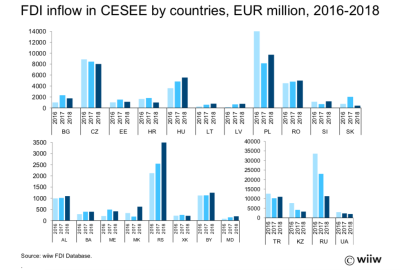 Protected from the fallout

However, the CESEE region has been to some extent protected from the fallout from international developments: “The CEESE countries are different, they are so much embedded in European value chains, the inflows here are mainly related to this area and not directly to the global trend,” said Hunya, adding that, “In CEE the general environment for investment is pretty good.”

While wiiw talks of a decline in international division of labour worldwide, many countries in Central and Southeast Europe — Hunya specifically mentioned Hungary, the Czech Republic, Romania, Slovakia, Slovenia and North Macedonia — are “very much integrated in the European division of labour in the manufacturing sector. They have subsidiaries specialised in various parts of the value chain, and these investments are very much export oriented.”

As a result, while not seeing the hike in investment experienced in the Western Balkans, the 11 EU member states of Central and Southeast Europe experienced only a modest drop in FDI inflows from €35.8bn in 2017 to €35.2bn in 2018.

There are also several factors that point to a change in the profile of FDI in the CEE region.

wiiw has looked beyond investment volumes, as many of the new projects are less capital intensive and therefore require smaller investments than those in traditionally popular sectors such as car manufacturing. Countries across the region are seeing more investments into professional and business services, IT outsourcing and tech niches such as game development.

Another active area is the financial sector, as foreign banks, especially Austrian banks, have taken over many of the banks in the Central and Southeast Europe region.

In addition, there is a growing trend towards reinvestment of earnings in local markets, a sign of the maturity of FDI investment in Central European countries in particular Czechia, Hungary and Poland. In the next stage, “With time companies based in the new member states accumulate capital and use this to enter foreign markets,” said Hunya, neighbouring EU member states and the Western Balkans being the main target markets.

While some new investments continue to be announced, Hunya said that “the bulk of FDI inflow is investing in existing companies, upgrading technology, increasing efficiency.” At present, there is a “big need for restructuring of subsidies due to labour shortages,” he added, which has resulted in investments into automation and other technologies.

Part of the shift to the Western Balkans can be explained by the need to tap labour resources there. However, the region is not seen as being able to take over from the larger and more advanced economies of CEE, said Hunya: “there is workforce available [in the Western Balkans], but the size of the whole region is pretty small so even if some subsidiaries move there it will not solve the labour shortage problem.”

Protests against the Serbian government’s handling of the coronacrisis and the announcement of a new lockdown descended into violent attacks on police and state buildings after they were taken over by far-right groups, some linked to Russia.

LONG READ: Serbia’s hijacked protests
3 days ago
Divided Poland to choose more turmoil in presidential election on Sunday
4 days ago
No enthusiasm for July 15 election in North Macedonia amid relentless coronavirus epidemic
5 days ago
Mongolia to go ahead with Naadam festival, but with no tourists
8 days ago
Protests pose unprecedented threat to Turkmenistan’s authoritarian government
8 days ago